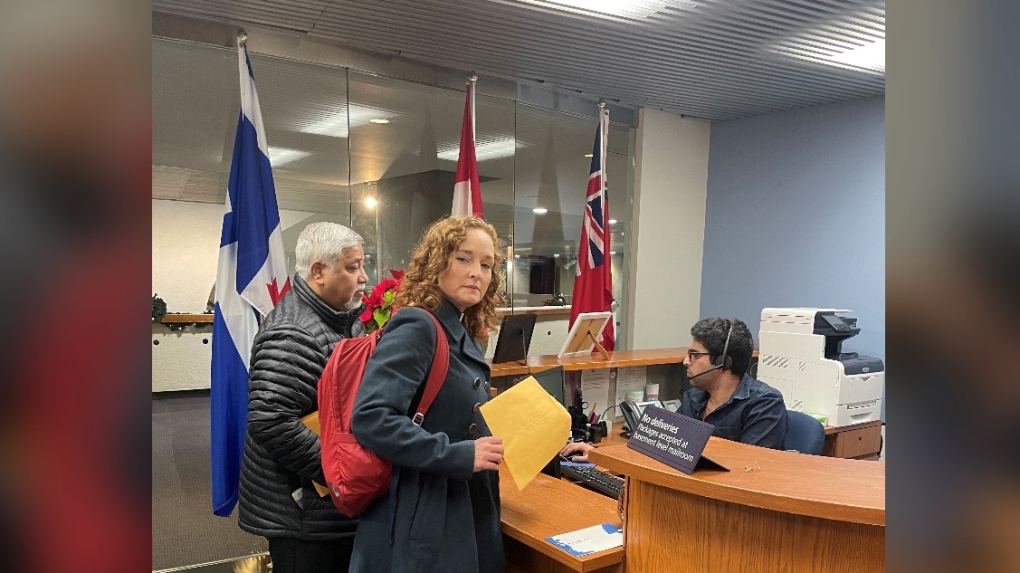 Father Prakash Lohale, left, and Rev. Alexa Gilmour hand delivered a letter to Toronto Mayor John Tory and all city councillors on Thursday demanding an emergency meeting to discuss the city’s lack of support for Toronto’s most vulnerable residents this winter.

If almost $50 million of Toronto’s budget can be reallocated to policing, surely the city can do something to keep the city’s unhoused people warm this winter, says Rev. Alexa Gilmour.

On Thursday morning, the United Church minister joined Father Prakash Lohale of Paroisse du Sacré-Cœur Catholic Church, John Ryerson of Faith in the City, and David Walsh of Ripples of Kindness in hand-delivering a letter to Mayor John Tory that demands an emergency meeting with a small delegation of faith leaders in January to discuss the city’s lack of support for Toronto’s most vulnerable residents during the coldest months of the year.

The letter, which has more than 150 signatories, was also sent to every city councillor.

This urgent call for action comes after a person experiencing homelessness froze to death on Christmas Day.

It’s also precipitated by the fact that, on average, 168 individuals who contact Toronto’s shelter intake system are turned away every day.

Those who signed the letter are calling on the City of Toronto to immediately increase the number of warming centres across the GTA (currently, there are only three warming centres in Toronto.), provide access to these sites 24 hours a day throughout the winter months, end encampment evictions and the destruction of survival gear, and add more non-congregate spaces within the regular shelter system.

They also said they want to “find ways to expedite long-term solutions to the housing crisis, ones that protect the most economically challenged among us.”

Currently, the city’s warming centres are usually only activated when Toronto’s Medical Officer of Health declares an extreme cold weather alert based on a forecast from Environment Canada that is -15 C or colder, or when there’s a wind chill of -20 C or colder.

“We need an immediate response that saves lives,” Gilmour, the founder and national director of the Stone Soup Network, told CP24.com Thursday afternoon.

“While the city is celebrating Christmas, the guest of honour is freezing to death on our streets. That’s unacceptable to someone who practices a compassionate faith, including Christians.”

Gilmour said faith leaders in the GTA and the organizations they represent want to work with the City of Toronto to find solutions to keep vulnerable people safe, unharmed, and alive during the coldest months of the year until enough decent, affordable housing is built.

“Everyone wants to see more housing in the end, but we can’t leave people to suffer, to be injured, and die while we wait for that to happen,” she said, adding Toronto has so many available resources that should be used to help its most vulnerable residents.

“We’ve already had one death and more people will die if something’s not done.”

In a statement provided to CP24.com, Taylor Deasley, of the Office of the Mayor, said Tory's “principal concern throughout the winter and throughout the entire year is the protection of our most vulnerable residents,” adding the city “would welcome any assistance which might be available from our faith communities.”

Deasley noted that prior to the major snow storm on Dec. 23, he worked with City staff to ensure warming centres were opened on Dec. 22, a day earlier than planned and before an Extreme Cold Weather Alert was issued, in an effort to “keep Torontonians safe during the storm.”

She also noted that the city’s warming centres were open in throughout Christmas and that the mayor was briefed on the capacity of these sites every day they were open and there was available capacity each night, including capacity in shelter buildings.

Deasley went on to say that warming centres are one aspect of the city’s 2022/23 Winter Services Plan for those experiencing homelessness, which also includes opening 1,000 more shelter spaces on top of the more than 8,000 spaces already provided every night to vulnerable residents. 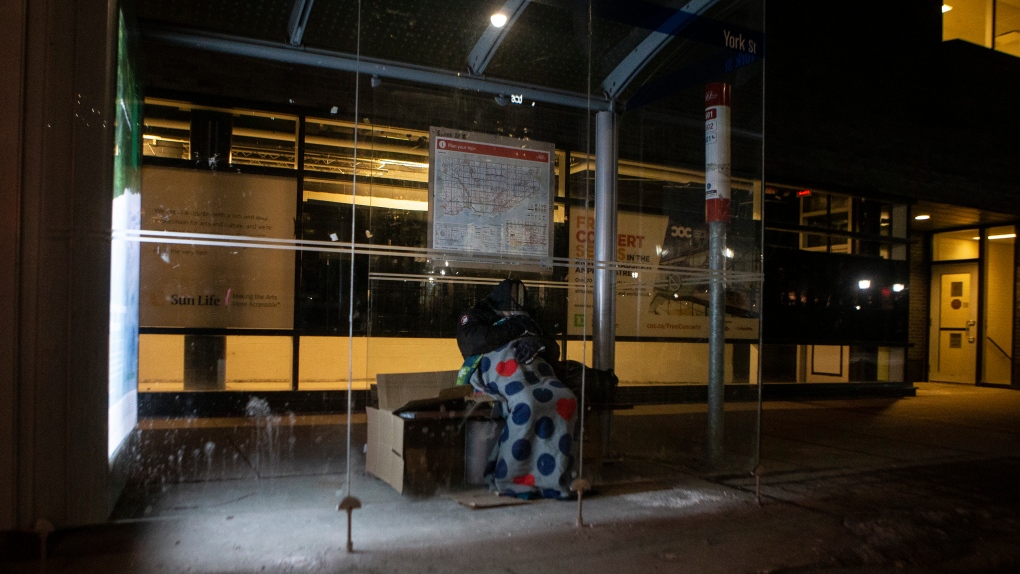 A homeless man sleeps in a bus shelter, in Toronto, on Friday, March 11, 2022. THE CANADIAN PRESS/Chris Young

“As part of this winter plan, City staff continue to dispatch 24/7 street outreach teams through our Streets to Homes program to offer help to people. The City still continues to make hundreds of visits to encampment to present housing options to them,” she said, adding that encampments in parks are “unsafe, unhealthy and illegal.”

“Beyond these measures, our principal focus is on building affordable and supportive housing as quickly as possible to provide people with more permanent and supported pathways out of homelessness. Last year alone, we successfully moved 3,409 people into permanent housing from shelters and with the 2023 Housing Action Plan, we will be able to provide more housing to even more vulnerable residents in our city.”

Like many of the letter’s signatories, Gilmour put her faith into action over the holidays and tried to help some of the city’s most vulnerable residents get out of the cold. On Christmas Eve around 10 p.m., she brought one unhoused person to one of Toronto's three warming centres, but they were told that the site was full. That individual refused to leave and sat down inside the doors of the warming center.

The next day, she was crushed to learn that another individual experiencing homelessness, only known as AR, had frozen to death alone in their tent.

Gilmour said back in 2016, Toronto operated several warming centres 24 hours a day, seven days a week. She said it’s possible for the city to bring back a full roster of these life-saving sites.

“We can do this. It’s not rocket science. We’ve done it before,” she said, pointing to the City of Hamilton, which after public outcry dedicated $125,000 in urgent funding to keep its warming centres open 24/7 throughout the holiday season.

“Winter happens every year. We knew people are homeless on the streets and we should prepare for them too. … Isn’t that what a compassionate city should be doing?”

If Tory doesn’t come forward with a promise to hold a meeting within a few days, Gilmour said the unofficial coalition of Christian faith leaders intends to expand its letter-writing campaign to the inter-faith community and to all Torontonians.

“We’ll see what the mayor says but we can’t wait too long because people are out in the cold,” Gilmour said.