Experts not sold on plan to sell civic naming rights 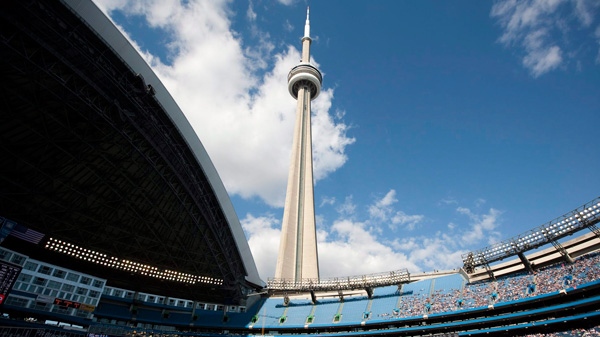 The CN Tower looms over the Toronto Blue Jays and Detroit Tigers as the Rogers Centre's roof is open for the first time in the 2011 MLB baseball season in Toronto Saturday, May 7, 2011. THE CANADIAN PRESS/Darren Calabrese

For many Torontonians, concern over branding the city spaces for cash stretches beyond the prospect of taking a stroll in Nabisco Square or riding the subway to Samsung Station.

That often uneasy conversation on sponsorship will be revisited after city council's executive committee voted to take a second look at a report that suggests Toronto should step up its efforts to earn some much-needed cash by soliciting corporate endorsements.

The recommendations, which could allow companies to stamp their names on public spaces and buildings, generated a maelstrom of humour when they hit the media.

Pundits sniggered at the idea of ambling across McDonald's Bridge or shooting hoops in an auditorium sponsored by Coffee Time.

One media outlet jokingly asked children if they'd like to go to Kraft Winthrow Park or a Wal-Mart community centre in one article. Another outlet imagined a city so saturated with sponsorship that it was called Toronto and Firkin.

But for urban designer Ken Greenberg, the idea of selling naming rights to city-owned facilities or spaces isn't a joke. He said he is apprehensive about welcoming more corporate sponsorship.

"We're already saturated with sponsorship and in some cases it's appropriate," said Greenberg.

"But at some point, there are public things that deserve to have their own place in the city without being brought to you by a particular company."

His hesitation goes beyond a sentimental desire to preserve the integrity of Toronto's public spaces. Selling off city naming rights to the highest bidder might also disorient Torontonians or gradually strip the city of its identity, he said.

"Names have a practical purpose, it's all about wayfaring," said Greenberg, who once worked as the city's director of urban design and architecture.

"When you keep changing these things around on people, they'll start resisting," he said.

"Take the Rogers Centre for example; I still call it the SkyDome."

Historically, Toronto has already played host to a variety of corporate sponsors. One look at a city map reveals a topographical billboard of company names. City dwellers can saunter down Yonge Street and go shopping at the Eaton's Centre, named after a once-popular department store chain. Live theatre aficionados can enjoy a show at the Sony Centre for the Performing Arts, which was originally named The O'Keefe Centre after a brewing conglomerate, but later reincarnated by a software company as The Hummingbird Centre.

The suggestion triggered a collective gasp from heritage aficionados like Bruce Bell.

Bell, a historian who conducts walking tours of Toronto, said he believes city council should show a bit more reverence for the city's identity.

"Renaming things with reckless abandon has a huge effect on the psyche of who we are as Torontonians," he told ctvtoronto.ca. "It seems that each generation forgets the generation that came before."

"Those stations are underground and they're splashed with advertisements anyway," he said. "The TTC needs a huge makeover and if corporate sponsors help maintain our transit system then it might be a good thing."

If Toronto were to adopt the naming rights recommendations, the city would join places like Calgary, Chicago and New York that actively seek out corporate sponsorship to earn much-needed revenue.

"Personally, I think we can cut out things like police doing guard duty on construction sites," said the executive director of the Toronto Public Space Committee.

Turney added that communities, not just city councillors, should have a more active say in whether the naming rights to their parks and facilities are sold off.

"There should definitely be more restrictions to who the city can sell names to and which sponsors they work with," he said.

City council's report indicates that not all buildings or spaces will be up for grabs; proposals to rename public facilities will be considered on a case-by-case basis. The recommendations are also quick to clarify that the city will retain ownership over any named properties.

But before Toronto can put those recommendations in place, if ever, the report needs to return to city council's executive committee for a second look at the age-old question: "What's in a name?"