Animal protective services has rescued a coyote in Oakville that was seen with a plastic container stuck on its head last week.

The animal was first reported to the Oakville-Milton Human Society last Tuesday and was last seen in Bronte Creek Provincial Park.

According to Caitlin Jones, manager of animal protective services, the jar that appeared to be stuck on the coyote’s head looks like a large potato chip or candy container, “like a Cheetos Puffs from Costco kind of thing or maybe something from a Halloween giveaway.” 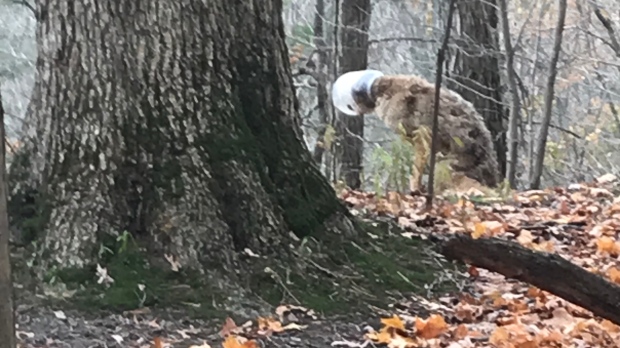 The plastic container has since been successfully removed from the coyote's head, who appeared alert, but dehydrated, according to the Oakville-Milton Humane Society.

Jones told CTV News Toronto on Monday that her team had been proactively patrolling and monitoring the area in search of the coyote, but the pursuit had been challenging as the animal was still able to run and jump over hedges. She added that using a tranquilizer gun may be too harmful to the coyote.

“Tranquilizer guns are more something you see on TV than anything,” Jones said. “With the body condition of this animal, it being as weak as it is, it could be really, really harmful because there body is not able to metabolize that.”

Great work by our amazing Animal Protective Services team who braved darkness and a fierce winter storm to safely rescue a coyote with a plastic container stuck completely over its head. The container was removed and the coyote is recovering at Hobbitstee Wildlife Refuge. pic.twitter.com/af9M0I6px0