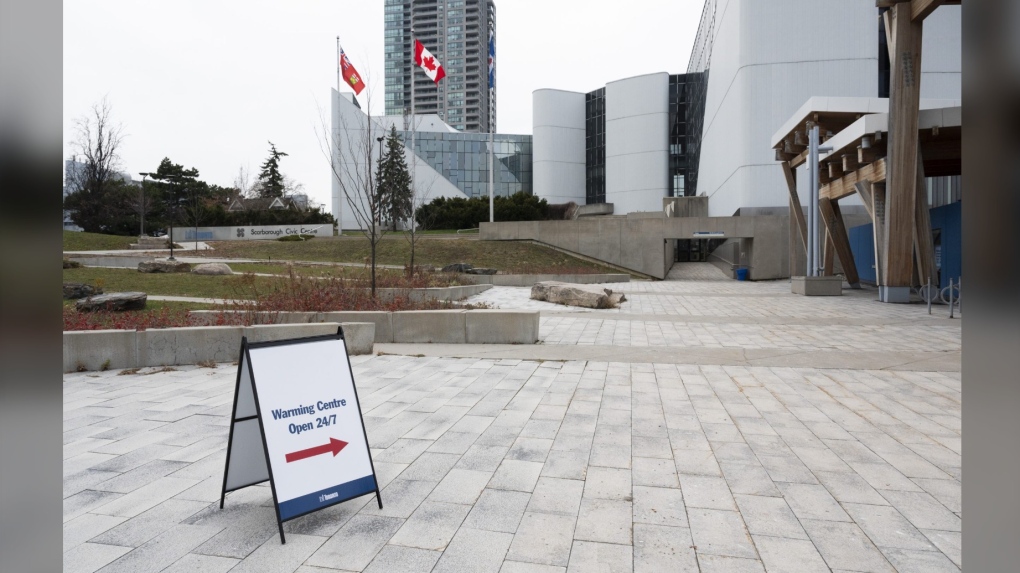 The City of Toronto is opening three warming centres in downtown, Scarborough, and North York on Dec. 15. One of these sites is located at Scarborough Civic Centre, which is pictured above (City of Toronto photo).

Dozens of faith leaders are launching a city-wide campaign today to demand more warming centres be opened immediately in Toronto.

This renewed call comes after an unhoused person died over the weekend in a fire at an encampment in Liberty Village. This is the second death of a person experiencing homelessness in the city since Christmas Day.

Organizers of the campaign are asking all Torontonians to write to Mayor John Tory and city councillors to urge them to “take action to save lives this winter” by increasing the number of warming centres across the GTA, making access to warming centres available 24 hours a day throughout the winter months, ending encampment evictions and the destruction of survival gear, keeping the current shelter spaces open, including the five shelter hotels slated for closing in 2023, and adding an additional 2,700 non-congregate spaces within the regular shelter system.

People are being invited to send a letter online and, if possible, mail a hard copy to the mayor and their local city councillor.

“We need an immediate response that saves lives,” Rev. Alexa Gilmour, founder and national director of the Stone Soup Network, said in a Jan. 9 news release.

“While the city is celebrating Christmas, the guest of honour is freezing to death on our streets. That’s unacceptable to someone who practices a compassionate faith, including Christians.”

Last week, a small delegation of Christian faith leaders hand-delivered a letter to Tory and all city councillors demanding an emergency meeting to discuss the city’s lack of support for Toronto’s most vulnerable residents during the coldest months of the year.

Gilmour said faith leaders in the GTA and the organizations they represent want to work with the City of Toronto to find solutions to keep vulnerable people safe, unharmed, and alive during the coldest months of the year until enough good, affordable housing is built.

The letter’s 155 signatories called on the City of Toronto to immediately increase the number of warming centres across the GTA, provide access to these sites 24 hours a day throughout the winter months, end encampment evictions and the destruction of survival gear, and add more non-congregate spaces within the regular shelter system.

Their effort was also precipitated by the fact that there are not enough shelter spaces in the city as on average in November, 168 individuals who contacted Toronto’s shelter intake system were turned away every day.

“This is unacceptable. Toronto is a compassionate city with the resources to open enough shelter and warming centre spaces for everybody who needs one,” campaign organizers said in a release.

“24-hour access to a warm indoor space during the winter months is a necessary service that the City of Toronto should provide.”

Currently, the city’s warming centres are usually only activated when Toronto’s Medical Officer of Health declares an extreme cold weather alert based on a forecast from Environment Canada that is -15 C or colder, or when there’s a wind chill of -20 C or colder.

CP24.com has reached out to the mayor’s office for comment.

Late last week, Spokesperson Taylor Deasley said Tory's “principal concern throughout the winter and throughout the entire year is the protection of our most vulnerable residents,” adding the city “would welcome any assistance which might be available from our faith communities.”

Deasley, in a statement provided to CP24.com, noted that prior to the most recent major snow storm on Dec. 23, Tory worked with city staff to ensure warming centres were opened on Dec. 22, a day earlier than planned and before an Extreme Cold Weather Alert was issued, in an effort to “keep Torontonians safe during the storm.”

She also said that the city’s warming centres were open in throughout Christmas and that the mayor was briefed on the capacity of these sites every day they were open and there was available capacity each night, including capacity in shelter buildings.

Deasley went on to say that warming centres are one aspect of the city’s 2022/23 Winter Services Plan for those experiencing homelessness, which also includes opening 1,000 more shelter spaces on top of the more than 8,000 spaces already provided every night to vulnerable residents.

“As part of this winter plan, City staff continue to dispatch 24/7 street outreach teams through our Streets to Homes program to offer help to people. The City still continues to make hundreds of visits to encampment to present housing options to them,” she said, adding that encampments in parks are “unsafe, unhealthy and illegal.”

“Beyond these measures, our principal focus is on building affordable and supportive housing as quickly as possible to provide people with more permanent and supported pathways out of homelessness. Last year alone, we successfully moved 3,409 people into permanent housing from shelters and with the 2023 Housing Action Plan, we will be able to provide more housing to even more vulnerable residents in our city.”