The provincial fire marshal has been called to investigate the cause of a massive blaze at the site of a former hospital in Brampton that started Monday evening.

The fire broke out at the old Peel Memorial Hospital site at approximately 7:30 p.m., and was not fully extinguished until 5 a.m. Tuesday.

The former hospital is being transformed into a new $600-million health centre that was slated to be completed by 2017. At the height of the fire, flames could be seen pouring from the scaffolding and the base of a crane sitting at the construction site, located on Lynch Street between Queen and Centre Streets.

Officials said it appeared that the wood beams and concrete forming boards helped keep the fire going for hours.

A Brampton Fire investigator told media that the fire had been extinguished on Tuesday morning, but approximately two dozen firefighters were still monitoring the 25,908-square-metre building hours later.

At noon, there were still hotspots on the underside of the decking to the second floor, CTV Toronto's Zuraidah Alman reported from the scene.

Toronto Fire Assistant Division Chief Gary Jarrett said the Ontario Fire Marshal had been notified, and may aid in determining the cause.

Jarrett said the damage was "significant," but did not yet have a dollar value of estimated damage. Firefighters believe the building is structurally unsound, and have yet to enter the building to inspect the damage.

Jarrett said the posts supporting the second floor deck are shaking in the wind.

"They could just twist and fail and fall on somebody. The last thing I want to do is have anyone hurt here," Jarrett told CTV Toronto.

Representatives from the Ministry of Labour and several structural engineers are investigating.

It’s not clear how long the project will be set back as a result of the fire.

A statement from PCL Constructors Canada says the “team is committed to working with all of our project partners in accelerating the process of delivering this much needed project to the community of Brampton.”

No one was injured in the blaze. 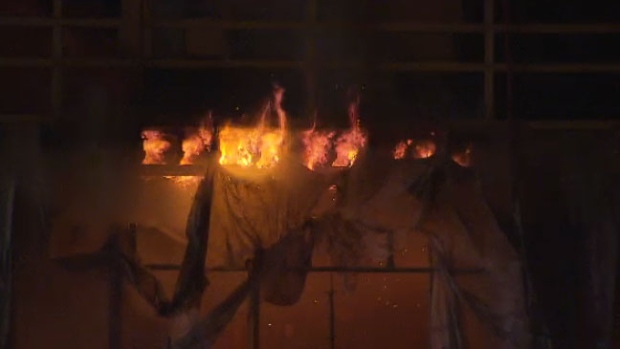 With a report from CTV Toronto's Zuraidah Alman