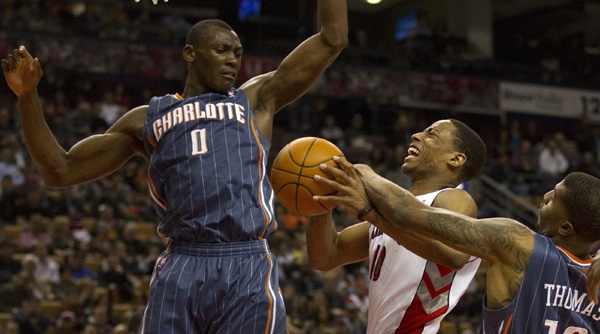 Toronto Raptors guard DeMar DeRozan (centre) is fouled on his way to the hoop past Charlotte Bobcats center Bismack Biyombo (0) and forward Tyrus Thomas (12) during first half NBA action in Toronto on Tuesday April 3, 2012. THE CANADIAN PRESS/Frank Gunn

TORONTO - Andrea Bargnani had a game-high 30 points and hit the pivotal jumper with 26.9 seconds remaining as Toronto defeated the Charlotte Bobcats 92-87 Tuesday night, giving the Raptors their first winning streak in more than two months.

With Toronto (19-35) ahead 88-87 following a long D.J. Augustin three-pointer, Bargnani drove and hit a turnaround hook shot over Byron Mullens for his eighth and ninth points of the quarter. Mullens then airballed a three-point attempt and Bargnani finished things off with free throws as the Raptors won two in a row for the first time since Jan. 25.

It's also the club's first two-game winning streak at the Air Canada Centre since Dec. 1-3, 2010, and it came at the expense of a scrappy Bobcats team that had won six straight in the head-to-head series.

DeMar DeRozan added 20 points as Toronto went 3-2 on its five-game homestand. Linas Kleiza had 12 of his 18 points in the second quarter while Jose Calderon finished with 11 assists.

Mullens led the way with 20 points for the Bobcats (7-44), who have dropped eight straight. Augustin chipped in with 18 after being a late scratch from the starting lineup with right knee tendinitis.

Toronto led by eight at half but sputtered to open the third quarter, making just three of its first 12 shots. While the Bobcats dealt with their own struggles -- opening 5-for-16 -- DeRozan shook the Raptors out of their slump with a layup sandwiched between long jumpers to make it 67-60.

He added a foul-line jumper with just over a minute remaining as Toronto went into the fourth with a 71-64 advantage.

Charlotte surged to within three in the early moments of the final quarter, then made it a two-point game on a Derrick Brown jumper with 2:34 left after Toronto had built another cushion. DeRozan knocked down a long jumper with 1:20 remaining to give the Raptors a little breathing room, but Mullens responded with a three-pointer to trim the deficit to one.

Bargnani and Augustin traded threes inside the final minute, setting the stage for the thrilling finish.