Wade, Bosh net 30 points each as Raptors fall to Heat 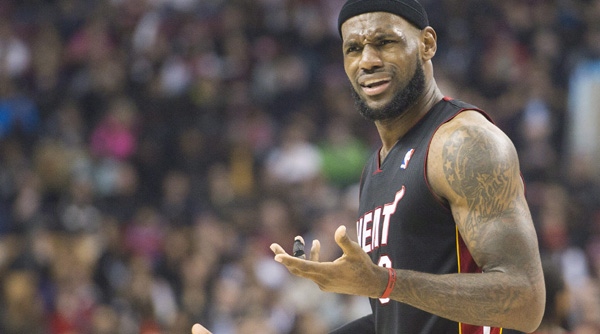 Miami Heat forward LeBron James reacts to the referee while playing against the Toronto Raptors during first half NBA basketball action in Toronto on Friday, March 30, 2012. THE CANADIAN PRESS/Nathan Denette

TORONTO - Dwyane Wade and Chris Bosh had 30 points each as the Miami Heat defeated the Toronto Raptors 113-101 on Friday night.

DeMar DeRozan led Toronto with 28 points while Andrea Bargnani had 27 points for the Raptors (17-35), who were trying to make it two straight for the first time since Jan. 24-25.

LeBron James had 27 for the Heat (37-13), who were coming off a 106-85 victory over defending champion Dallas the night before at home.

The Southeast Division-leading Heat haven't been great on the road, having lost six of their last eight away from Miami. But they rarely have trouble in Toronto as Miami has now won seven straight against the Raptors.

Tied at 83 to start the fourth Miami pulled ahead with four points but Toronto stayed close. Bargnani and James Johnson each hit threes between a pair of Bosh free throws and Toronto was again with within one point of the Heat at 8:44.

Toronto head coach Dwane Casey called a time out after Wade was left wide open to make good on a three-point dagger at 5:45 to put Miami ahead 97-89.

Wade continued to penetrate the paint and set up Bosh for an easy putback to keep it an eight-point game. Bosh followed that up with a monster dunk and Miami's lead was up to 10 points, a lead they would not relinquish.

An alley-oop by James followed by Bosh's slam had Miami up 63-53 two minutes into the third quarter. The Big Three kept up the momentum with Wade hitting a three, then slamming down a lob pass from James for an eight-point Miami lead at 7:40.

After Bargnani connected from beyond the arc, Johnson hit a layup with a four minutes left in the third to shave Miami's lead to 73-72. It was tied at 76 when DeRozan broke away for a driving layup at 3:29, forcing Miami to call time.

Bargnani hit another three and the Raptors went on a 7-0 run to keep it tied going into the final quarter.

Toronto's bench slimmed Miami's lead to two points early in the second when Johnson followed up a reverse layup with a putback slam dunk to make it 35-33 before Bargnani came in to tie it with a fadaway jumper.

The Raptors had their first lead of the game at 6:21 when a Miami turnover led to a driving DeRozan layup and a 41-39 advantage.

Miami pulled back ahead when James hit a sky hook, then knocked down a jumper over Bargnani to give the Heat a 57-51 lead with a minute to go in the half.

Miami jumped out to an 10-0 lead less than three minutes into the game as Wade sliced through a porous Toronto defence to put up a four easy points and grab two boards.

The Heat continued to have their way. Bosh and Wade each finished off big dunks, James made a driving layup and Mario Chalmers hit a wide-open bucket to make it 22-8 with 6:13 left in the opening quarter.

DeRozan helped pull Toronto back in the game with a pair of free throws, then a pull-up jump shot as Toronto finished the quarter down 31-27. DeRozan had 10 points in the first.

Linas Kleiza made his second straight start for Johnson, who came in off the bench after missing a game with a upper respiratory infection.