Raptors mine Nuggets for 105-96 victory 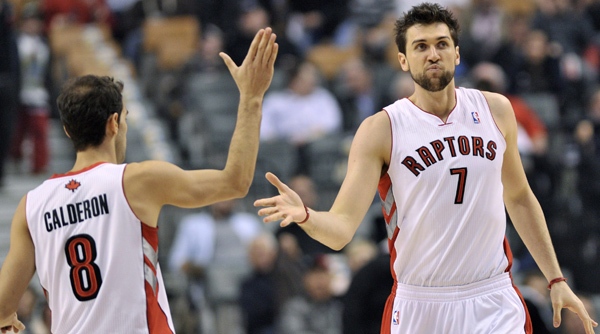 TORONTO - Andrea Bargnani reached a milestone by scoring 26 points in the Toronto Raptors 105-96 victory over the Denver Nuggets on Wednesday.

Bargnani came in 13 points shy of 6,000 career points, and reached the milestone with a free throw late in the second quarter.

He is just the fourth player score 6,000 points in a Raptors uniform, joining Vince Carter, Chris Bosh and Morris Peterson. Bargnani had a stretch of 10 straight points in the fourth quarter as Toronto opened a seven point lead.

DeMar DeRozan, who returned after missing two games with a left ankle injury, had 11 third quarter points and finished with 17.

Jose Calderon finished with 10 assists and 10 points, to stretch his streak to four games with 10 plus assists. Calderon is third in the NBA with 18 games of 10 or more assists, trailing only Steve Nash (31) and Rajon Rondon (25).

Denver scored 10 unanswered points early in the third to take their first lead of the game. Toronto responded with a late 8-3 run capped off by a Uzoh lay-in to tie it at 85.

Uzoh, who was signed to a 10-day contract on Tuesday, finished with 5 points.

DeRozan and Raptors coach Dwane Casey were both assessed technical fouls in the third quarter for arguing non-calls.

The Nuggets used a late 8-2 run, including two dunks from Al Harrington, to take a brief 53-52 lead. However, Linas Kleiza, who was making his first start since Jan., 27, drained a buzzer beating three-pointer to give the Raptors a 55-53 lead at the break.

The Raptors used a 9-2 run to take a five point lead after one quarter.