Balancing the books: Who will fix Ontario's money woes? 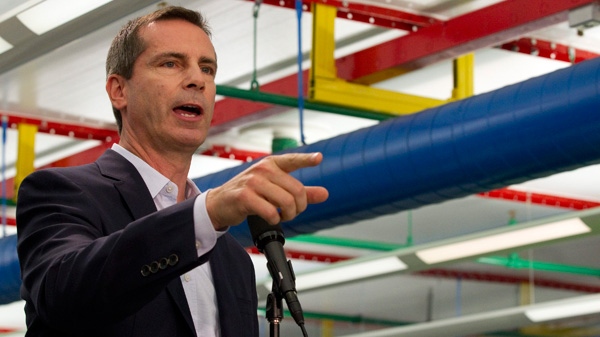 If the province's balance sheets are any indication, the victory party for whoever wins Ontario's upcoming election will be short.

While overseeing education, health care, corrections and more, Ontario's next premier will also be tasked with wrestling down the province's mounting $245-billion debt and $16 billion-plus budget deficit.

Premier Dalton McGuinty has pledged to eliminate Ontario's deficit by the 2017-18 fiscal year -- the same timeframe promised by Progressive Conservative Leader Tim Hudak. Though much of Andrea Horwath's campaign has focused on household debt, the NDP leader has touted her overall platform as "reasonable, practical and affordable."

As leaders jockey for the province's top job ahead of the Oct. 6 election, there appears to be no telling who'll be in power when it comes time to balance Ontario's books.

In the latest Nanos Research poll for CTV and The Globe and Mail, the Tories sit at 35.4 per cent support, the Liberals have 31.9 per cent and the NDP have 22.8 per cent.

"It'd be very nice if you could go into serious economic research and say ‘Aha! The best way to get rid of debt is…,' but it's an area where there's no consensus," he said.

Betcherman says that he believes the best way to tackle the province's financial woes is by raising revenue through taxes and expenditures while investing in education and health -- the two pillars of McGuinty's past campaigns.

Still, he stresses that it's impossible for Ontario's next premier to draft a foolproof remedy. An aging population and a sluggish economy are just two of many factors complicating the province's debt and budget deficit problems, said Betcherman.

"Ontario faces the same question that was at the heart of Washington's debt ceiling debate: What is a reasonable amount of time to pay off debt?"

While it's unclear if the Liberals or Tories can close Ontario's financial gap in less than seven years, Hudak's party has suggested that it can balance the books through careful spending cuts.

If elected, the Progressive Conservatives have vowed to trim spending by two per cent for four years in every area except health care and education. McGuinty, who also champions health and education, has cautioned voters against the plan, warning that the Tories will make "deep, unprecedented" service cuts.

Hudak, meanwhile, has attacked McGuinty for the HST and other taxes by labelling the Liberal leader as the "Tax Man" -- a moniker that might resonate with Beatles fans.

"Health and education are the bulk of the provincial government's expenditure," the University of Toronto professor told CTVNews.ca. "If you check the breakdown, these are really big items. Can you really leave them alone and address the debt?"

On the phone from Toronto, Duranton wouldn't endorse one party over another. Instead, the professor said that McGuinty, Hudak and Horwath have failed to acknowledge that "unpleasant things" need to done to dig the province out of its financial hole.

"It seems they're all being really vague about the situation," he said. "They're basically saying, ‘Elect me, and everything will be okay.'"

How did we get here?

When Ontario's next premier is ready to face the province's fiscal situation head on, Duranton recommends that looking back at how the debt accumulated may be the best way to start.

According to Duranton, Ontario's debt situation may be attributed to:

In Duranton's opinion, the best way to dig the province out of debt may be to raise the 13 per cent harmonized sales tax by three to five percentage points. He points to the federal government's decision to introduce the GST in the early 90s, noting that the tax became a considerable source of income.

"I know I'm saying something that sounds really ugly but it's probably the most efficient way to pay off the debt," he said.

Hudak has said he'll keep the sales tax intact on all items except home energy bills. Horwath, on the other hand, has taken a more forceful stance against the sales tax. The NDP has pledged to take the HST off daily expenses like hydro, home heating and gasoline while shifting the burden onto corporations.

"We will take the HST off essential necessities and if the Harper government refuses to let it happen, we will scrap the HST altogether," reads a page from Horwath's "Plan for Affordable Change."

Too much, too soon?

But regardless of which leader comes into power, Duranton said that voters shouldn't expect swift economic change as the province is still recovering from a brutal recession.

"Ideally you need to wait until the recession is over and then you clean your house," he said. "The problem is we don't believe politicians when they tell us that. People want to see things happen here and now, which might make the recession worse."

That's a position that Mikal Skuterud, a fellow economics educator, agrees with.

While provincial leaders jockey for the lead poll position ahead of the election, Skuterud, an associate economics professor at the University of Waterloo, warns voters looking for a quick fiscal fix may be disappointed.

"I think the mistake people make is they imagine that the government should run its finances like a household should," said Skuterud, adding that a "spend less, save more" attitude isn't necessarily how a premier should approach the province's budget.

"Things are much more complicated than that," he told CTVNews.ca.

Borrowing, multipliers and infrastructure spending are all factors that a prospective premier needs to keep in mind.

While debt is a frightening word, Skuterud points out that, more than anything, it's a convenient political football.

"Having debts isn't necessarily a bad thing," he said. "Part of the government's role is to deal with a naturally occurring business cycle and to influence economic activity."

To a certain extent, says Skuterud, it is possible for a government to run up a manageable debt.

As the leaders try to convince voters that they have a handle on Ontario's fiscal situation, Skuterud also argues that much of the province's debt is out of the government's hands.

"I think you'd be hard pressed to find any government budget all over the world that hasn't suffered in recent years," he said, referring to the 2008 global recession. "You can't attribute everything to the government of the day."