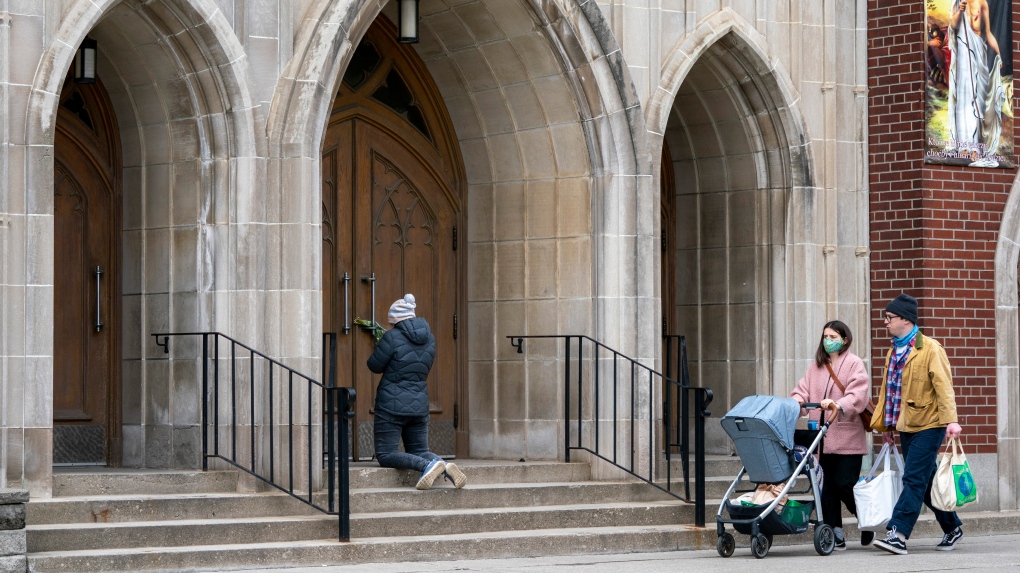 A woman prays on the steps outside St. Casimir Church in Toronto on Friday May 1, 2020. For the past three months, the Archdiocese of Toronto has worked on different ways to serve its parishioners safely when the time came for Ontario to reopen.But the eucharist, one of the most important sacraments in the Roman Catholic Church, remains a difficult rite to navigate. THE CANADIAN PRESS/Frank Gunn

TORONTO -- For the past three months, the Archdiocese of Toronto has worked on different ways to serve its parishioners safely when the time came for Ontario to reopen.

But the Eucharist, one of the most important sacraments in the Roman Catholic Church, remains a difficult rite to navigate.

It traditionally involves a priest placing a wafer of bread on a congregant's tongue or in their hand, then serving them with sacramental wine from a communal goblet.

Neil MacCarthy, director of public relations and communications for the Archdiocese of Toronto, said the organization wanted to make sure the ritual could be performed safely.

"It would be difficult for someone to look at (the Archdiocese's safety protocols) and say, 'These guys aren't concerned about this,"' MacCarthy said in an interview.

Most faith-based communities in Ontario switched to online services in the early stages of the COVID-19 pandemic, with the provincial health authorities mandating the closing of churches, temples, synagogues and other houses of worship.

With much of Ontario now in Stage 2 of reopening, indoor religious services are allowed, though at 30 per cent capacity with worshippers remaining at least two metres apart.

Anticipating the reopening, the Roman Catholic Church in Ontario began planning how it would go about its own reopening. That meant sourcing thousands of pieces of personal protective equipment (PPE); training priests, employees and volunteers on how to disinfect church pews; and even changing how mass is organized, among other steps.

The Archdiocese of Toronto -- which includes 27 municipalities and stretches well beyond the city's borders -- has implemented a modified version of communion where a priest delivers his blessing from more than two metres away, hands the congregant their wafer, and they then move more than two metres away from the priest before removing their mask and consuming the bread.

No sacramental wine will be served in this adapted version of the Eucharist.

When reached for comment, spokespeople for both Toronto public health and Ontario's chief medical officer of health pointed to the province's guideline, which advises the suspension of activities that increase risk of disease transmission, including sharing "books, communion, microphones, prayer mats, prayer shawls, water, etc."

Dr. Vinita Dubey, Toronto Public Health's associate medical officer, said in a statement that she urges religious leaders to be cautious in how they reopen their buildings.

"Faith community leaders are strongly encouraged to carefully consider how and when to re-establish in-person activities," said Dubey. "This is because we know that religious gatherings tend to occur in indoor settings and are generally attended by older populations who are more likely to experience severe impacts from COVID-19."

MacCarthy said the Archdiocese consulted with epidemiologists and public health officials when making its reopening plan, aiming to balance the church's spiritual needs with community safety.

"We submitted our plans to the province, we had medical folks that were involved in putting together the plan, and certainly it was shared with the government," he said.

The Anglican Church and United Church -- Ontario's other largest Christian denominations -- are both relying on online services for the summer.

The Anglican Church's Ontario diocese plans to reopen its buildings on Sept. 1 when it believes it will be safe to do so.

"We are not offering the Eucharist at this time but look forward to being able to return to its celebration when conditions permit," said Alex Pierson, the executive and financial officer of the Anglican Diocese of Ontario.

United churches traditionally close in the summer months and would be reopening in late August or early September anyway.