Three new streets are coming to Etobicoke and one of them may be named after the late former mayor Rob Ford.

“Help make history in the new Etobicoke Centre,” the City of Toronto wrote in a tweet on Monday afternoon.

The urge for the public’s assistance comes after the city shortlisted 10 potential street names for the three new streets that will be created as part of the “Six Points Interchange” in the redevelopment of Etobicoke Centre, located just north of Kipling subway station.

Help make history in the new Etobicoke Centre! #CityofTO shortlisted 10 names submitted by you to name 3 new streets that will be created with the redesign of #SixPoints Interchange. Let us know what you think & rate the names by Sept 2 https://t.co/0APrYhoYW8 pic.twitter.com/2uvxwZDSJc

The city said the redesign will feature a “new road network and at-grade intersection at Dundas Street, Bloor Street and Kipling Avenue.” As well, it will feature improved pedestrian facilities, improved access to Kipling Station and separated bike lanes on all the major streets in the area.

Parkettes, public art installations and a district energy plan will also be installed in the perimeters. 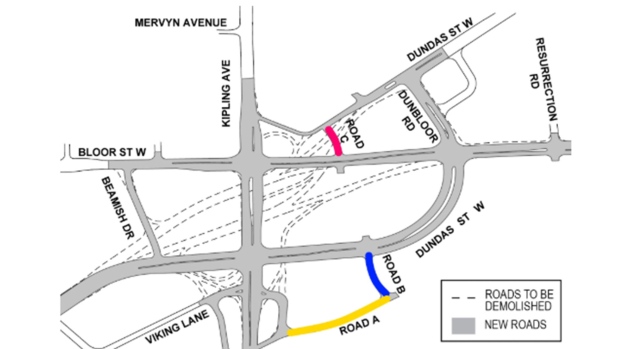 A map showing the new roads in "Six Points Interchange" is seen. (City of Toronto)

Rob Ford, who served three terms as city councillor for Ward 2 Etobicoke North and served as mayor of Toronto from 2010 -2014, is one of the names listed in the 10 options for the three roadways. Ford died in 2016 at the age of 46 after he was diagnosed with a rare and aggressive cancer. 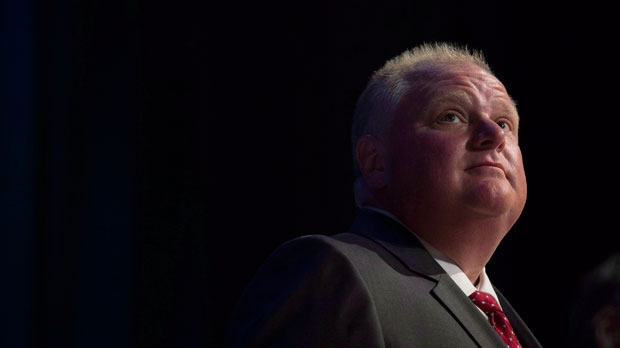 Rob Ford pauses while participating in a mayoral debate in Toronto on July 15, 2014. (The Canadian Press / Darren Calabrese)

This is not the first time the city has considered naming something in Toronto after the controversial politician.

City council voted against renaming the stadium at Centennial Park after Ford back in 2017.

Mayor John Tory agreed to recommend the renaming at the time at the request of the Ford family, but acknowledged that the late former mayor made comments during his time in office that were “hurtful and disrespectful to some.”

Other options for the street names include notable citizens; Jerry Howarth, a long-time resident of Etobicoke and voice of the Toronto Blue Jays for 36 years, Darwyn Cooke, an award-winning comic and graphic artist who grew up in the Etobicoke Centre area, Dr. Judith Pilowsky, a prominent clinical psychologist who helped thousands of Etobicoke residents, and Dr. W.K Fention, an active member of the Etobicoke Centre area through his medical practice before he died in 1955.

Other options listed by the city for street names:

[View the city's renderings for the area here]

Construction in the area is ongoing and residents are able to vote for the name they prefer up until September 2.