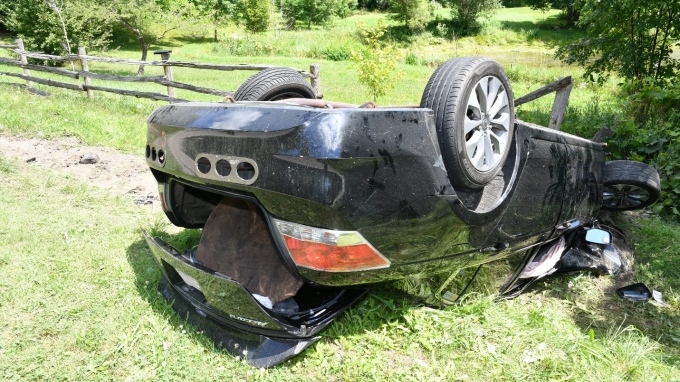 A Honda Accord involved in a fatal collision is seen in this photograph provided by the Special Investigations Unit.

TORONTO -- Ontario’s Special Investigations Unit (SIU) has cleared an officer of wrongdoing after a cyclist was fatally struck by a speeding vehicle being pursued by police in King City, Ont. last year.

According to a report issued by the SIU on Thursday, a police officer was conducting speed enforcement in the area when they noticed a Honda Accord travelling around 125 km/h. The officer activated the emergency lights on their cruiser and pursued the speeding vehicle.

“It was sunny, the atmosphere was clear, and the roads were dry,” SIU Director Joseph Martino wrote in his report. “The posted speed limit was 60 km/h and the road was hilly.”

The driver of the Honda Accord had increased its speed and was travelling around 150 km/h, Martino added, and began to rotate counter-clockwise, crossing into the northbound lane.

The right passenger door of the Honda Accord then reportedly struck a cyclist who was riding northbound. The 54-year-old man identified as Daniel Bertini was pronounced dead at the scene.

The Honda Accord then reportedly mounted an embankment and became airborne at 93 km/hr before landing on its roof in a ditch. According to the SIU, Bertini’s body was found by officers underneath the vehicle, and his bicycle “broken into many pieces.”

The driver of the Honda Accord was found walking a short distance from the collision scene. He was taken into custody.

CTV News Toronto has reached out to York Regional Police to confirm if the driver was charged in connection with the incident.

The SIU is an arm's length agency that investigates any incident involving police and a member of the public that results in death, serious injuries, or allegations of sexual assault.

According to Thursday’s report, the officer involved in the incident travelled for the most part under 90 km/hr while pursing the vehicle.

“The (subject officer) briefly reached a speed in excess of 100 km/h, which is not surprising as he attempted to make up ground on a speeding vehicle. However, the officer quickly realized the Honda was too far ahead and, in my view, wisely shut down the pursuit,” Martino said. “By the time of the collision, the cruiser was well back of the Honda Accord in distance and time.”

“There is no basis for proceeding with criminal charges against the officer.”