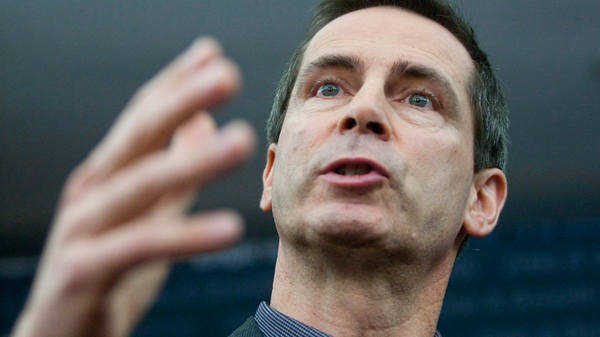 Ontario Premier Dalton McGuinty gestures as he speaks to members of the media in Ottawa on Friday, Feb. 4, 2011. (Pawel Dwulit / THE CANADIAN PRESS)

BRAMPTON, Ont. - The governing Liberals' surprise decisions to halt off-shore wind farms and freeze the minimum wage have nothing to do with a provincial election that's just eight months away, Premier Dalton McGuinty said Tuesday.

Anti-wind power protesters have greeted McGuinty in many communities across the province, but the premier insisted the moratorium on off-shore projects is not politically motivated.

"People are free to do as they wish in terms of drawing whatever inferences that they desire from the decisions of the government," he said after speaking to a business audience in Brampton, Ont.

The government announced the sudden reversal on off-shore projects last Friday, just minutes after McGuinty had finished speaking to reporters.

It said the province wouldn't move ahead with the renewable energy projects -- which it had previously touted as key to its green ambitions -- until there is more scientific research on their impact.

That leaves the province's minimum wage at $10.25 an hour, marking an end to a series of annual hikes that followed the party's election in 2003.

The premier was hellbent on pushing through his green energy policies until he realized it could cost him several Liberal seats, including that of Health Promotion Minister Margarett Best, said Progressive Conservative Peter Shurman.

"This is blind panic," he said. "The premier talks piously about science. The only science that's involved in backtracking on these wind turbines is political science."

"I think it's obvious that it's McGuinty who's actually twisting in the wind on this policy, because he's very, very concerned about the political ramifications of offshore wind in some of his key ridings," she said.

Of the 1,500 green energy applications to the government's Feed in Tariff program, only five were for off-shore wind projects.

There was only one off-shore wind project, near Kingston, that had reached a contract with the Ontario Power Authority, but it had not received other necessary approvals.

McGuinty had previously dismissed concerns from local residents who opposed wind turbines because of health concerns. But he changed his tune on Tuesday.

"The fact of the matter is that there is a dearth, there is a shortage of science when it comes to locating wind turbines in fresh water," he said.

Standards also need to be developed with the United States before wind turbines are erected in the Great Lakes, McGuinty added.

"If they decide to put up a thousand in a square mile, I'm not sure that would be in keeping with standards that properly protect the aquatic life in the Great Lakes," he said.

"So we'll take the time to do this thoughtfully and responsibly."

The government said delaying the off-shore projects won't reduce Ontario's plan to generate 10,700 megawatts of power from renewable sources each year, about 90 per cent of it from wind power.

But there may be other hurdles ahead.

An Environmental Review Tribunal has also been holding hearings in Chatham and Toronto on a proposal by Suncor for a wind farm in Thamesville, which some residents fear will disrupt their sleep and cause other health problems. Those hearings were set to resume in Chatham on Tuesday.