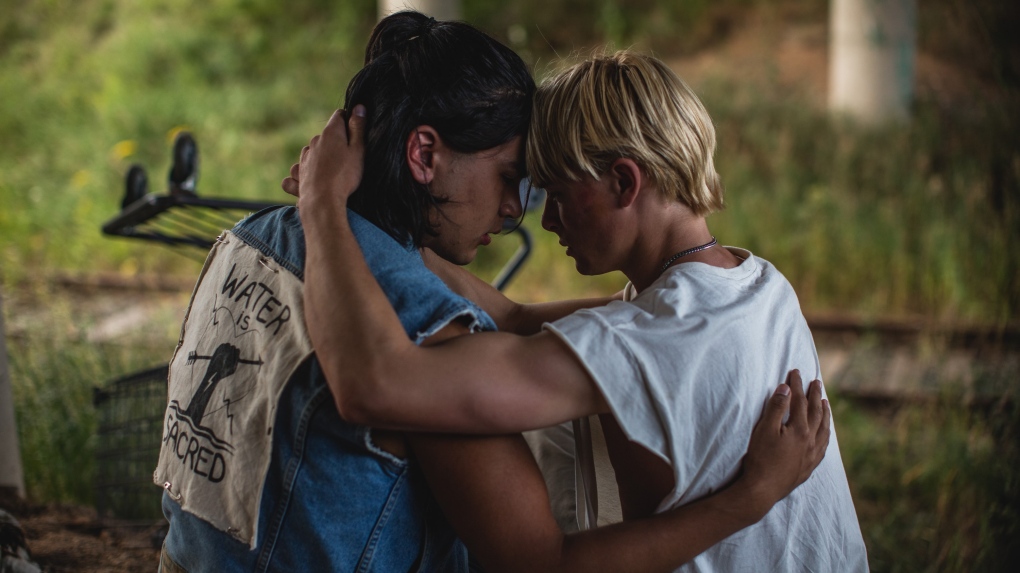 A scene from 'Wildhood' is shown in this undated handout photo. An Indigenous Two-Spirit odyssey and an adaptation of Catherine Hernandez's award-winning novel "Scarborough" are among the Canadian additions to September's Toronto International Film Festival. THE CANADIAN PRESS/HO - Riley Smith Photo
TORONTO -

An Indigenous two-spirit odyssey and an adaptation of Catherine Hernandez's award-winning novel "Scarborough" are among the Canadian additions to September's Toronto International Film Festival.

Organizers have announced the Contemporary World Cinema and Discovery program lineups, as well as more galas and special presentations, including Oscar-winner Jane Campion's much-anticipated drama "The Power of the Dog."

Discovery's lineup of emerging filmmakers includes the world premiere of "Wildhood" from two-spirit L'nu writer-director Bretten Hannam, in which the Mi'kmawprotagonist discovers his sexuality and connects with his heritage while fleeing his toxic father with his half-brother.

Phillip Lewitski, Joshua Odjick, Michael Greyeyes and newcomer Avery Winters-Anthony are among the stars in the east-coast story, filmed in English and Mi'kmaw.

"Scarborough," directed by Shasha Nakhai and Rich Williamson, will debut in Discovery with a look at three children who become friends in a low-income neighbourhood of the titular Toronto suburb.

Toronto-based Hernandez's 2017 debut novel on which the film is based made the short list for several prizes, including the Trillium Book Award.

Campion's Netflix-bound "The Power of the Dog" will screen at TIFF after premiering at the Venice International Film Festival. The adaptation of Thomas Savage's novel stars Benedict Cumberbatch as a Montana ranch owner and Kirsten Dunst as a widow who marries his brother. It's the first feature film in nearly 12 years from the New Zealand writer-director, who won an Oscar in 1994 for her screenplay for "The Piano."

Wednesday's announcement had a robust Canadian lineup, with other titles including "Kicking Blood" by Blaine Thurier, described as a "sultry, perma-stoned, ultra-modern spin on the vampire genre."

"Maria Chapdelaine" from Sebastien Pilote is an adaptation of Louis Hemon's 1913 novel, about a teen in rural Quebec who is torn between three suitors.

And "Quickening" from Haya Waseem "explores the life of a young woman of colour navigating love, heartbreak, and family turmoil."

Other newly announced buzzy films for the Sept. 9 to 18 festival include the world premiere of the multigenerational family drama "The Humans" by Stephen Karam, based on his Tony Award-winning, Pulitzer Prize-finalist play of the same name. The cast includes Beanie Feldstein, Richard Jenkins, Amy Schumer and Steven Yeun.

In the comedy-drama "The Good House" by Maya Forbes and Wallace Wolodarsky, Sigourney Weaver and Kevin Kline star in the adaptation of the Ann Leary novel about a reunion between ex-lovers.

Lily-Rose Depp will star in two world premieres: The Christmas family comedy "Silent Night," directed by Camille Griffin and also starring Keira Knightley, and the drama "Wolf" by Nathalie Biancheri, which is set in a radical behavioural reform institute.

This year's digital-and in-person festival will also have a new series, TIFF Rewind, featuring memorable films from past festivals and digital talks with talent. Films in the series will stream on Crave while the chats will unfold on TIFF's social media channels.