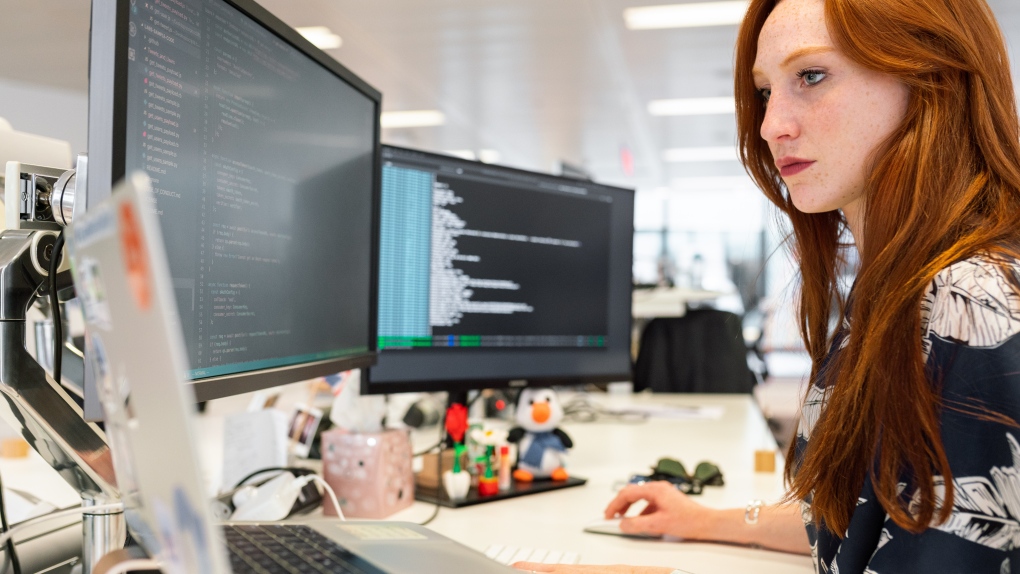 A woman can be seen working at a desk in the file photo above. (ThisIsEngineering/Pexels)

The term has appeared widely this month, trending on Twitter and sparking a hashtag on TikTok that's accumulated more than 30M views.

“Quiet-quitting is the concept of performing your job expectations and not going above and beyond,” director of people operations at Humi, a Toronto-based humans resources software company, Andrea Bartlett told CTV News Toronto Wednesday.

Those who quietly quit still attend work daily and complete their mandatory tasks, but will not stay additional hours or take on extra projects.

While the term has recently exploded, the concept itself isn’t new, says Bartlett, and instead shows a need for reflection within our workplace cultures.

“This isn't what I would consider a new thing – it's just a different name for a concept that has always existed in the workforce,” she said.

She also underlined there’s nothing wrong with simply meeting expectations at work, and that many choose to implement that boundary.

“You need to balance your workforce with people who will meet the expectation,” she said. “Advancing or climbing the corporate ladder, if you will, might not be important to them, and that's completely okay.”

Instead, her issue with this iteration of the concept is she says it places blame on the employee rather than examining the bigger workplace culture picture.

“Workers have gotten so caught up in hustle culture they're now having to demonstrate their burnout by taking a step back from working to achieve more,” she said.

According to a recent 72-page study of over 5,500 employed Canadians, 35 per cent of those in the workforce reported experiencing a degree of burnout, and one in four said work significantly impacts their mental health.

Dr. Philip Oreopoulos, professor of economics and public policy at the University of Toronto says the newfound popularity of quiet quitting reflects patterns observed in the changing labour market.

“In the last several years, we've seen efforts by employers to squeeze more and more productivity out of workers while paying them the same or less,” he told CTV News Toronto Wednesday.

“As a result, I think it's generated some resentment among workers in a way that they’re pushing back to try to consider if there's other alternatives out there, whether that’s working in another job, or just working less.”

Much like recent talk of a ‘great resignation’ amongst North American workers, Oreopoulos says quiet-quitting stems from workers feeling underappreciated, underpaid and disengaged with their jobs.

Unfortunately, there could be consequences for those who choose to stick to the minimum, he says, especially within industries where one's wage reflects a need to be on-call at various times, work lengthy hours, or committ to extra work.

“Doing less than what's expected may raise problems for these workers because the employer can go find someone else at the same wage," he said.

To address employee morale and workplace culture concerns, Bartlett says a first step would be for the province to ensure companies are implementing new ‘Right to Disconnect’ policies properly.

“A policy itself is not enough,” she said. “You need to integrate that policy as a behaviour within your workplace.”

Ultimately, Oreopoulos say it’s important workers feel appreciated, and that one way to deal with resentment could be to increase wages.

“I think that the best thing that employers can do is to make sure that their workers feel wanted and feel part of the process.”

Ukraine is pushing its Western allies to provide it with fighter jets, a week after winning pledges of sophisticated modern tanks to help it beat back Russia's invasion force after almost a year of fighting.