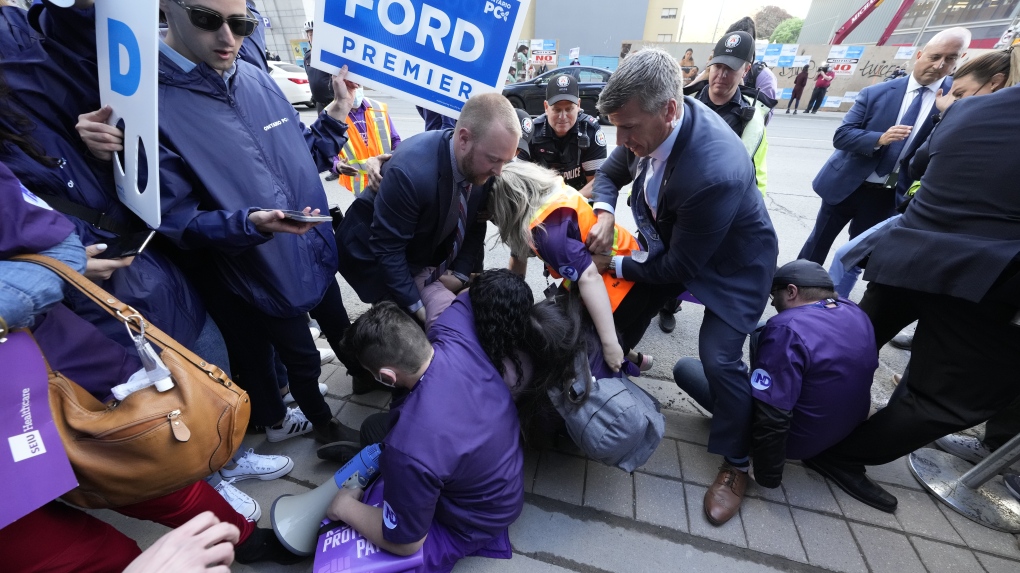 A union representing tens of thousands of Ontario health care workers says it is exploring all legal options after two nurses were injured while protesting outside the venue of the provincial leaders’ debate in midtown Toronto on Monday.

The Service Employees International Union (SEIU) Healthcare said in a news release Thursday that it retained Ruby Shiller Enenajor DiGiuseppe (RSED) LLP to look into what possible legal avenues it can pursue for the incident.

“When women and men on the frontline of care are injured at a peaceful protest, we really need to ask ourselves what is happening to our province. SEIU Healthcare will always defend the rights of our members,” union president Sharleen Stewart said in a statement.

“We are exploring all legal options available because we will not be intimidated as we advocate for their safety and security and a strong public healthcare system for workers and patients.”

The incident happened outside the TVO building on Yonge Street as the campaign bus of Progressive Conservative Leader Doug Ford was arriving. The union said about 200 registered practical nurses were protesting against Bill 124, which was enacted in 2019 by the Ford government and caps salary increases for public sector workers, including nurses, below the rate of inflation.

The man is then seen face down on the roadway, writhing in pain. Another woman in a purple shirt was seen on the ground and appeared to be pulled and prodded several times before she could get up.

The man on the ground was later loaded into an ambulance and taken to the hospital for treatment of injuries that reportedly included a concussion.

“Every Canadian has the right to engage in peaceful protest without fear of retaliation or violence,” Stephanie DiGuiseppe, a partner at RSED, said in a statement.

“Police and government have a duty to ensure that nurses and their fellow Canadians can safely engage in legitimate protest activities. We look forward to working with SEIU.”

RSED is a litigation boutique located in Toronto that has advocated for freedom of expression, freedom of assembly and police accountability, including championing legal challenges to police violence at the 2010 G20 Summit protests.

Ontario Provincial Police said in a statement to CP24 on Wednesday that members of its Protective Services Section who were providing security to three party leaders intervened when “individuals were attempting to block the access to the facility where the debate was being held.”

“For the safety of all present, individuals were moved aside, during which time one fell to the ground. The individual was taken to hospital for assessment and was later released,” OPP spokesperson Bill Dickson said.

“While the OPP respects the rights of everyone to freedom of expression and peaceful assembly, disruptive behaviour can pose safety concerns. At any time, when an individual’s behaviour reaches a threshold where it becomes unsafe, police are required to intervene to restore public safety. Only the level of intervention necessary to maintain peace, order and security is used.”

- with files from Chris Herhalt

More than 30,000 residents of Sydney and its surrounds have been told to evacuate or prepare to abandon their homes on Monday as Australia’s largest city braces for what could be its worst flooding in 18 months.