TORONTO -- A TTC busker featured in a viral video with the hashtag #KindnessisContagious is still in shock about his experience last month.

Sitting in the living room of his Burlington townhouse, and holding his guitar, Mo Guzman couldn’t contain his smile as he recalled what happened on Nov. 26 while performing at the King Street subway station.

“You know, that type of stuff, to me, happens on TV. It doesn't happen to you, it happens to someone you’re watching on TV,” Guzman said, speaking to CTV News Toronto on Sunday.

“To be that person for once in a lifetime was very overwhelming, and also a feeling of being very blessed.”

Guzman was told he was being featured in a documentary about subway musicians. But that was a ruse for the real reason. A Toronto ad agency, which doesn't want to be identified, set up the cameras for a charitable endeavour, trying to recognize and reward someone they thought was deserving.

That person was Guzman.

So as the 26-year-old was playing “How Sweet It Is” people started to donate more and more money.

“I didn't know what to expect. But I knew something was up when I saw so many people coming down, and dropping in a bunch of cash and singing along with me.”

By the end of the song, his guitar case was full of bills. Around $2,000, according to Guzman. 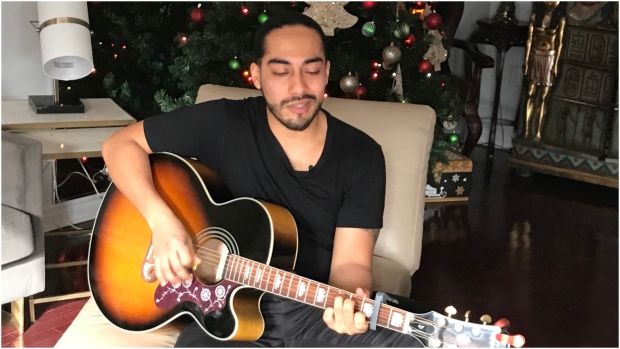 And while he hasn’t done anything extravagant with the money, he said “it definitely covers the bills, and then some.”

His family grew this summer. He and his wife welcomed a daughter, Malaya on Aug. 1. Guzman said that while fatherhood may have changed him, there’s no changing the message behind the video he’s featured in. He said people are really reacting to the kindness is contagious theme.

“People have been saying ‘you know, the world needs a little bit more of this kind of generosity’. Not just this time of year, you know, let’s treat people as if it were the holidays all year round.”

A message that Guzman helps to spread as he connects with the crowd during his performances.