Layton confirmed to CP24 Wednesday that he will not be running for re-election in the upcoming municipal elections. He cited his desire to focus more of his energy on fighting climate change while also “rebalancing his life” so that he can spend more time with his family.

“I want to make sure all of my energy is being dedicated to what I think is the next global crisis that we’re facing,” he said. “It needs more energy injected into it and so I’ll be looking at what the options are to try and scale up solutions.”

“That’s what I really liked focusing on at City Hall, finding solutions to problems and then scaling them up.”

Layton said he doesn’t have a job lined up, but he is not considering a run for leader of the Ontario New Democratic Party—a position that is now open following the resignation of Andrea Horwath. Layton’s father, Jack Layton, served as leader of the federal NDP for about eight years prior to his death in 2011.

“My second objective in this change of careers is rebalancing my life to have more time with my kids,” he said. “I don’t think that to become a leader of a provincial party, the leader of the official opposition, would actually contribute to that.”

The University-Rosedale councillor has sat on city council for 12 years and was known for voicing progressive ideas, especially when it came to affordable housing and climate change, in addition to transit and cycling infrastructure.

Toronto Mayor John Tory said Layton will be missed on council, adding that he has been an inspiration when it comes to forging a path to reconciliation with Indigenous people and setting city-wide climate change goals.

“Mike Layton is a very decent guy,” Tory said. “I wish him well in his future endeavors. I have a feeling we haven’t seen the last of him in politics, because he’s a young man and he can have another career and then come back to politics if he wishes. I think it’s in his DNA.” 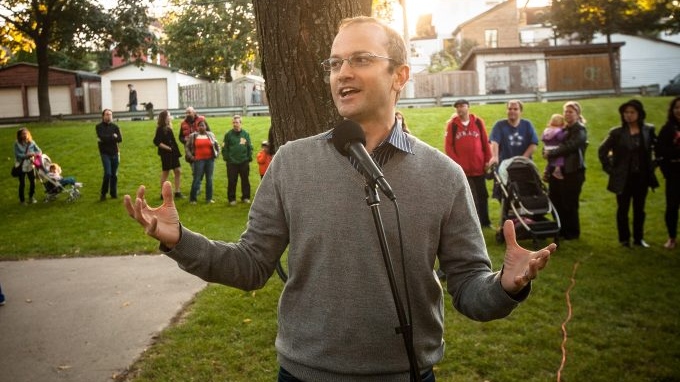 Mike Layton is seen in this undated photograph taken from his website. (mikelayton.to)

Just over a quarter of council races will not have an incumbent in October. Former deputy mayor Denzil Minnan-Wong, Willowdale councillor John Filion and Davenport councillor Ana Bailão have all announced they will also not be seeking re-election.

Three other seats have been left open after current councillors stepped down from their roles.

Former Toronto Board of Health Chair and representative for Spadina-Fort York Joe Cressy resigned in April to pursue a career at George Brown College, while Toronto Centre Counc. Kristyn Wong-Tam and Etobicoke North Counc. Michael Ford left to run in the provincial elections.

Nominations for municipal races are open until Aug. 19. The election is slated for Oct. 24.