'This is not Toronto’: Sixteen people shot over long weekend in city

Sixteen people have been shot over the long weekend in Toronto.

Speaking to reporters on Monday, Toronto Police Chief Mark Saunders said there were 11 separate shootings since Saturday, with about 33 per cent of the occurrences taking place in the northwest end of the city.

Hours later, another man was shot in the city’s Lawrence Heights neighbourhood, marking the third shooting of the day. A second victim made their own way to the hospital following the shooting, police said.

On Monday night, another person was injured after a shooting in the city's Humber Heights neighbourhood.

Around 4:20 a.m. on Aug. 5, two male victims were injured in a shooting near Church and Adelaide streets. One of the victims was transported to the hospital with life-threatening injuries and the other victim sustained serious injuries

A few hours earlier, five people were shot at a packed nightclub in North York. Saunders said that shell casings were found inside and outside of the building.

“I find this one very bothersome,” he said. “I find it disturbing when you have more than 100 people and someone would be brazen enough to pull out a gun and start shooting.” 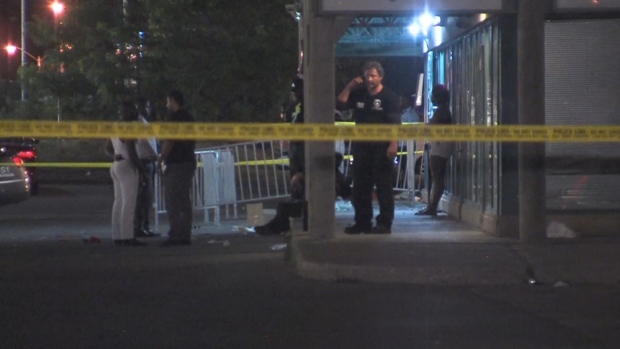 Officers attend to the scene of a shooting at the District 45 nightclub at Finch Avenue and Keele Street Monday August 5, 2019.(CTV News Toronto)

No suspect descriptions have been released, but Saunders said that the case should be “solvable” as there were many witnesses.

“We will definitely be in good shape to solve this one if witnesses come forward,” he said.

Two other people with gunshot wounds made their way to the hospital, but police could not confirm where they were shot.

Toronto police responded to two shootings in the Liberty Village area on Sunday. Investigators said that in one of the incidents, eight to 12 shots were fired. One male victim was taken to the hospital with non-life threatening injuries as a result of the shooting.

Another person was shot in the upper body on Sunday at a luxury home on Toronto’s Bridle Path, which was being rented out on Airbnb at the time. 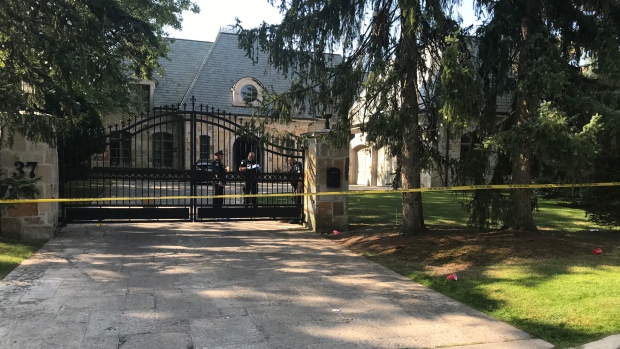 Two people were also injured after a shooting on Saturday near Dufferin Street and Glen Long Avenue, south of Lawrence Avenue West.

Saunders said that in four of the 11 shooting occurrences that took place over the weekend, no victims were located. He also said that “nothing that seems to indicate” a connection between the shootings, although said the investigations are still ongoing.

‘This is not the City of Toronto,’ Saunders said.

Saunders stressed that the gun violence seen this weekend is “not normal” for Toronto.

“I do not anticipate in a three-day or two-day span that I’m going to be talking about 13 people shot. This is not Toronto,” he said.

"When I've got 13 people right now in the city that have been shot, that have a bullet in them, I've got concerns about that and I can tell you we will be putting additional resources in specific places that we think will help deter and reduce the gun violence that's occurring in the city right now.” 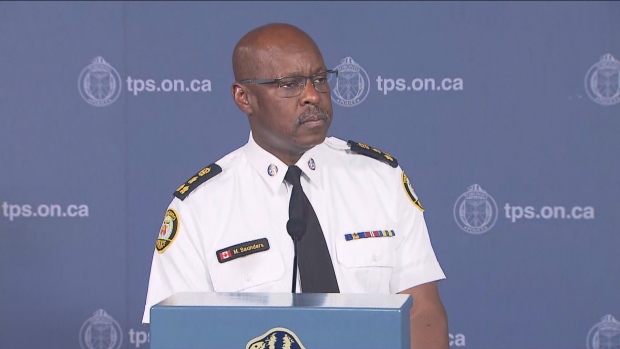 The shootings occurred over a busy long-weekend in Toronto, which hosted the Toronto Caribbean Carnival. Saunders stressed that while there was increased density in the evenings, he was not going to “cast a light” on the festival.

“We can’t let these 11 occurrences define, because of this event, this is what happened. They are not sanctioned by the Caribbean Carnival at all,” he said. “We had a lot more venues that were open and a lot more visitors here in the night. No doubt there is a potential that may have been a factor…but I don’t know.”

In a statement issued prior to Saunders’ news conference, Toronto Mayor John Tory said that he firmly believes that a handgun ban will help address gun violence in the city.

“The gun violence we have seen in recent days in our city is absolutely unacceptable,” the statement said. “I led city council - joined by other major Canadian cities - in sending a clear message on the need for a ban on handguns, assault rifles and semi-automatic firearms.”

“This was always put forward as a part of the answer to gun violence together with changes to other laws affecting things like bail, additional support for police, and the paramount need for all three governments to invest together in kids, families and neighbourhoods.”

When asked about a handgun ban in Toronto, Saunders responded by saying there is no silver bullet in reducing gun violence, but he would welcome anything that removes a handgun from the city.

“Anything that removes a handgun, it is a good day in the city.”