These Toronto tenants stopped their entire building from being evicted. Here's how they did it

These Toronto tenants stopped their entire building from being evicted. Here's how they did it 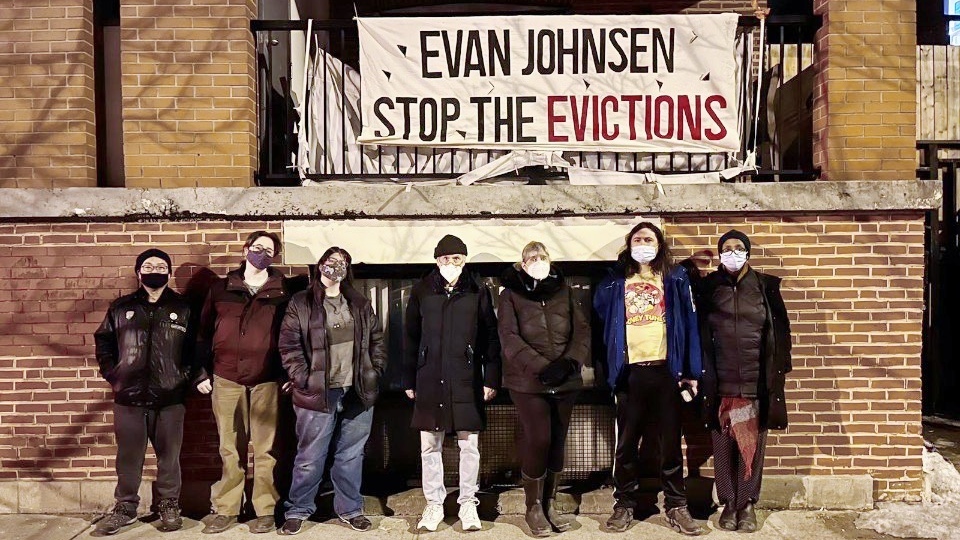 The tenants of 12 Lansdowne (Handout provided by Cordelia Huxtable)

Toronto tenants are celebrating after a three-month effort that saw their landlords rescind eviction notices issued to their entire west-end apartment building.

Cordelia Huxtable, who has lived in her unit for seven years, said she didn't know the building was up for sale when it changed ownership in 2020.

But when the new owners took over, she said she began to notice red flags. First, she said tenants were offered money to leave their units. The offer raised eyebrows amongst residents and, although they eventually collectively declined the offer, they “decided to keep an eye on the situation,” she said.

In the two years since, Huxtable said building residents continued to strengthen their relationships – helping one another through the pandemic, caring for those who were sick and offering support and assistance when repairs or maintenance was needed within the building.

It wasn’t until January of this year that tenants were forced to put their collective power into play again, when they said they received paperwork informing them Spiegel and Johnsen intended to terminate their leases. The tenants held demonstrations, displayed banners, communicated collectively and, in the end, were successful in their refusal to leave their homes.

Three months after owners initially told tenants their leases would be terminated, the notice was rescinded.

CTV News Toronto has made multiple attempts to obtain a statement from Spiegel and Johnsen but didn’t receive a response.

Tenants at 12 Lansdowne have received confirmation that their landlord has withdrawn all eviction notices against them.

When asked what was key to their success, this is what the tenants said:

TALK TO YOUR NEIGHBOURS

“What we learned by coming together as a building is that we have more power than we realized,” Huxtable said when asked what advice she’d give to other tenants in similar situations.

David Bell, a member of Parkdale Organize, also said getting to know your neighbours is a key step in getting and staying organized.

“I think a lot of us get used to city living where you're in a building and you don't really know your neighbours,” Bell said. “But actually having conversations, whether it's in the lobby or in the elevator, and finding out if the issues that you're having are also being faced by other tenants is key.”

“And chances are, they’re [facing the same issues].”

From there, Bell suggested tenants start to discuss how they can deal with those issues collectively.

Huxtable said the resources available within the community were “really important” to the tenants’ efforts.

“There were many times when it got really intimidating – having clear-headed people who are outside of it, who can be like, ‘No, this is normal,’ is so important,” she said.

In paperwork given to the tenants, reviewed by CTV News Toronto, initially informing them of the intention to terminate their leases in January, the wording on the directive stated owners “wanted” to end their tenancy.

When those communications were presented to Parkdale Community Legal Services, the clinic helped them determine that, while their landlords had expressed their intent to evict them, they hadn’t filed the paperwork with the Ontario Landlord-Tenant Board (LTB) yet, meaning the request was not formalized and there was no legitimate eviction date set.

Community legal clinics have the ability to see if paperwork has been filed with the LTB, Bell said, which can be helpful in figuring out what stage of the eviction process you may be in.

Without these resources, Huxtable said the tenants might not have known the full extent of their rights.

There are a number of community legal clinics located across the Greater Toronto Area. For a full list, click here.

While Parkdale Legal Services and Parkdale Organize supported tenants, Bell said a majority of the work was done by the residents themselves.

“They’ve done an amazing amount of work, and all the credit goes to them.”

WORK AS A GROUP

“I think the number one reason for the success [of 12 Lansdowne] was their commitment to working as a collective and not letting themselves be individualized,” Bell said.

“Tenants can quickly shift [power dynamics] by working together and staying united,” he said.

When tenants were asked to communicate with their landlords or lawyers individually, they almost always declined, Huxtable said, instead opting to communicate as a group through writing, if possible.

PREPARE FOR A LONG PROCESS

Huxtable says patience is key. “This process can take months to years,” she said.

She said, much like the residents of 12 Lansdowne, tenants sometimes think they have to move out at first mention of eviction.

“But it's not actually enforceable until the LTB orders it,” she said. “That's a really important piece.”

The tenants of 12 Lansdowne eviction notice was never filed with the LTB, and therefore was not yet legally enforceable. The owners rescinded their warning before it ever got to that point.

Moreover, due to an ongoing backlog at the LTB caused by the pandemic, some tenants have been forced to wait months before receiving a hearing or decision from the board.

“And there’s even a chance then that the LTB might not order you to move out,” she said.

Russian President Vladimir Putin signed treaties Friday for an illegal annexation of occupied Ukrainian territory in a sharp escalation of his seven-month invasion of Ukraine. Its leader immediately countered with a surprise application to join the NATO military alliance.

A revived Hurricane Ian set its sights on South Carolina's coast Friday and the historic city of Charleston, with forecasters predicting a storm surge and floods after the megastorm caused catastrophic damage in Florida and left people trapped in their homes.