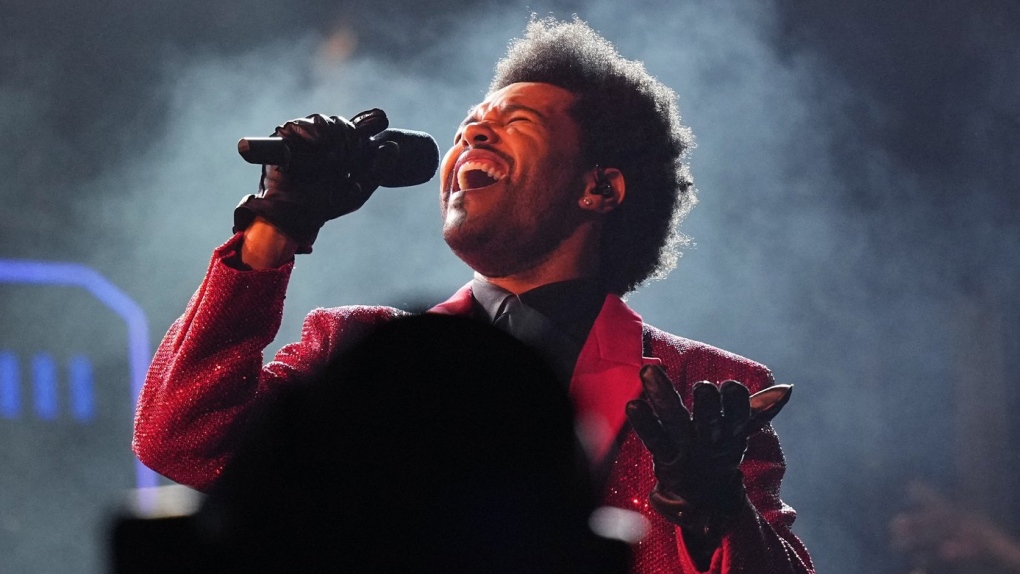 The Weeknd performs during the halftime show of the NFL Super Bowl 55 football game on Feb. 7, 2021, in Tampa, Fla. Toronto singer the Weeknd has donated US$500,000 to help launch XO Humanitarian Fund, a new initiative to fight global hunger under the United Nations World Food Programme. THE CANADIAN PRESS/AP/David J. Phillip

The Weeknd returned to his Toronto hometown on Thursday with all of the flames and fury of his spectacular live stadium concert.

More than two months after a nationwide Rogers network outage ruined the Canadian pop star's plans to kick off his world tour at home, he made up for it by rounding the massive show back to the city for the final stops on the North American leg.

"They're going to have to pull me off the stage tonight," he assured the crowd at the Rogers Centre.

Turns out, that wasn't exactly true.

Despite expectations that a surprise might've been in the works, The Weeknd stuck to the same 29-song setlist he's been performing at all stops on the After Hours Til Dawn Tour.

Against a massive set of a post-apocalyptic city, he sang a relentless run of hits that included "Can't Feel My Face," "I Feel It Coming," "Starboy" and "Blinding Lights," without sticking around for an encore.

Behind him, a dilapidated line of skyscrapers burst into flames, poured out smoke, and at one point appeared to collapse with the illusion of massive digital screens.

A group of dancers veiled entirely in red cloth walked in a rhythmic procession throughout much of the show, eventually making their way to a giant moon on the opposite side of the stadium.

Amid all of the bombast, the evening offered the singer, born Abel Tesfaye, an opportunity to bask in his success with a local crowd for the first time in years.

Tesfaye grew up in Scarborough, Ont., on the east end of Toronto, and it's here where he rose from buzzworthy Toronto artist to a force on the music charts. Eventually, that landed him a coveted spot as entertainment at the Super Bowl halftime show in 2021.

This was his first Toronto concert since his fourth studio album "After Hours" established him as one of the top artists in the industry.

And he told the crowd this homecoming reminded him why he makes music.

"My first show in Toronto -- my first show ever -- was the Mod Club in 2011," he recalled of the now-closed concert venue.

Tesfaye only referred to the Rogers-owned venue as SkyDome throughout the night.

He never uttered the name Rogers, or referenced the outage that forced him to cancel a little more than an hour before showtime in July.

It was one of several setbacks that faced the first leg of the After Hours Til Dawn Tour in a summer characterized by pandemic uncertainty for live events.

First, opening act Doja Cat dropped out due to tonsil surgery about a month before the shows were set to begin, while a large fire erupted outside the Las Vegas stadium where his fans were leaving a show in August.

Then in early September, Tesfaye lost his voice in the middle of his Los Angeles concert, leading him to postpone the performance to an undermined future date.

It seemed even the Toronto performance might've been headed towards trouble when Montreal DJ and opener Kaytranada's mixing equipment malfunctioned, leaving the notoriously shy artist to entertain the crowd for a few minutes of silence.

"(It was) probably too much heat," he joked before getting back to the music.

Fans didn't seem to mind and by the time The Weeknd hit the stage everything appeared to be running smoothly.

The Weeknd will return to play a second show on Friday night.

His After Hours Til Dawn Tour is then expected to launch further legs that move through Mexico, Europe, Asia and additional regions, though no specific announcements on the timing have been made yet.

This report by The Canadian Press was first published Sept. 22, 2022.

Democratic Sen. Raphael Warnock defeated Republican challenger Herschel Walker in a Georgia runoff election Tuesday, ensuring Democrats an outright majority in the Senate for the rest of President Joe Biden’s term and helping cap an underwhelming midterm cycle for the GOP in the last major vote of the year.