Three people have been arrested and police are looking for two more suspects after a stabbing outside of a high school in Hamilton, Ont. that left a 14-year-old boy dead.

The victim sustained life-threatening injuries and was transported to a local hospital for treatment. Around 3:40 p.m., police said the teenager had succumbed to his injuries.

Hamilton police said the victim's mother was at the scene when the assault happened.

Police have confirmed that the victim was a student at Sir Winston Churchill Secondary School.

Three teenaged suspects have been arrested, and police are trying to locate two "outstanding suspects."

The two male suspects arrested, a 14-year-old and a 19-year-old, were located not far from the crime scene. Bereziuk said the third suspect was later arrested.

Police identified the first outstanding suspect as a teenaged girl, black with long black hair; wearing a black coat, black T-shirt with white writing on it, and black shoes with white laces.

Police said they are in possession of a video of the incident, and encouraged the suspects to come forward.

"We will locate these outstanding suspects and are asking them to turn themselves in," Bereziuk said. "We will identify these people, and it's in their best interest to contact [police]."

Bereziuk said police are continuing to investigate "anybody and everybody" involved in the incident.

No charges have been laid yet. 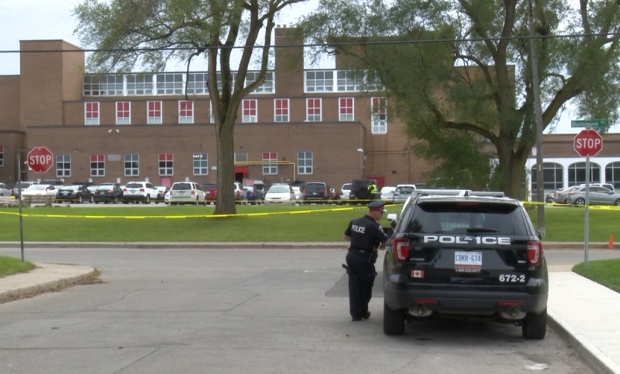 Investigators said Monday night that there was a relationship between the victim and the suspects, but said they could not provide any details on the extent of the relationship.

Several schools and daycares in the area were briefly placed under a hold and secure order as police investigated the incident. Residents were asked to stay away from the area.

In a statement, the Hamilton-Wentworth District School Board said it is “shocked” by the incident.

“Our hearts are broken by the news that a 14-year-old student has died. There are no words that can begin to describe how shocked we are to learn about this loss,"  Manny Figueiredo, the board's director of education, said.

"Our entire community shares in the grief and sadness of having lost a valued and loved student. We can never tolerate acts of violence. We must always promote acts of kindness and peace."

Investigators said they are still looking for evidence in the area, including a knife that may have been used in the incident. Police said they have already found a can of pepper spray near the scene. Police are asking residents in the area to not touch any evidence, and to call investigators immediately if found.

Hamilton police's Major Crime Unit has taken over the investigation. They are asking anyone with information or cellphone video to contact police at 905-546-4123 or to reach out to Crime Stoppers anonymously.

Hamilton Police confirm a 14-year-old male student @Churchill_HWDSB has died as a result of injuries sustained during an assault outside the school in #HamOnt. Police are working closely with @HWDSB and continue to investigate. 1/2