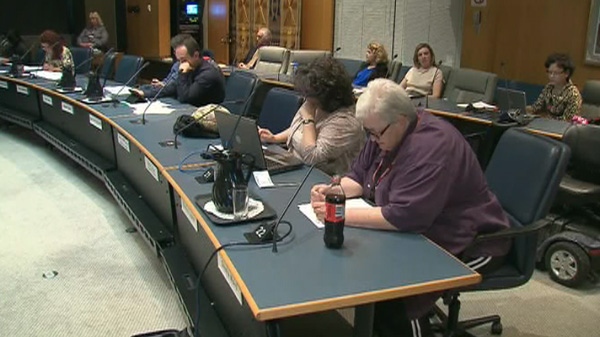 Toronto school trustees are looking at layoffs in order to balance a budget shortfall on Wednesday, March 21, 2012.

Toronto District School Board trustees are looking at laying off hundreds of staff in order to meet an $85-million budget shortfall.

A proposal put before a trustee committee on Wednesday recommended eliminating 430 educational assists. More than 100 other positions, including school secretaries, vice-principals and high schools teachers, could also be on the chopping block.

"If we're being squeezed every year, we have to find a place to take off the pressure" said school board trustee Howard Goodman.

Part of the budget woes can be attributed to full-day kindergarten, Goodman said.

The program, which was introduced in 2010 and is being rolled out across the province, means the board has to hire new early childhood educators and elementary school teachers.

The amount of money that the school board gets from the province for each new full-day kindergarten class falls $15,000 to $20,000 short, Goodman said.

The union said that cutting staff isn't the way to go about balancing a budget and it says it's ready for a fight.

"This will cause havoc in the schools," said CUPE Local 4400 president John Weatherup.

The proposed cuts will cover $51 million of the predicted $85-million budget shortfall.

The layoffs proposal will go to a final vote on Wednesday, March 28.

With files from Zuraidah Alman