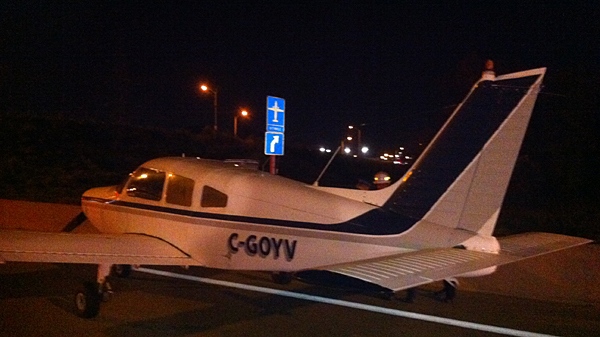 This Piper aircraft made a safe landing on Highway 407 near Woodbine Ave. late on Friday, Oct. 8, 2010. Note the sign pointing to nearby Buttonville Airport. (Tom Podolec/CTV Toronto)

A small private plane has made an emergency landing on Highway 407, prompting authorities to close a section of road near Highway 404 and Woodbine Avenue.

The area where the 1974 Piper pa28 plane landed is just under two kilometres south of Markham's Buttonville airport.

The Ontario Provincial Police said no injuries or collisions were reported in the incident, which occurred late Friday evening.

The wife of the pilot told CTV Toronto that her husband had gone out for a pleasure flight by himself.

She said he told her he was fine.

The cause of the emergency landing isn't yet known.