Mike Schreiner has built up a reputation among political watchers as a likable, sharp and down-to-earth politician since he was elected as Ontario's first provincial Green four years ago, and that perception made its way to a vastly expanded audience this month when he made his debut as the first leader of his party to participate in a provincial election debate.

"You can definitely see a difference from yesterday to today, for sure," Schreiner said the day after the May 16 debate while knocking on doors in Huntsville, Ont., located in one of the ridings where his party hopes to capitalize on Schreiner's increasingly recognizable brand and nab another seat in the legislature this June.

Residents honked horns, waved and shouted, "Go Green!" at Schreiner's bright green electric campaign vehicle. People who answered their doors in the scenic waterfront town commended him on how he grilled his rivals over policy issues the night before.

"You did a darn good job," one man told Schreiner at a doorstop. "You held Doug Ford to account."

That's a task that's taken up much of Schreiner's time as his party's first-ever Green legislator. For the last four years, he's been challenging Ford -- who's running for re-election for the Progressive Conservatives -- on the environmental impact of the former Tory government's plans, including plans for highways and other developments.

"One of my primary motivations was to advance the climate agenda, and instead of being on an offensive mode of moving the province forward, I feel like I've had to spend a lot of my time pushing back against Doug Ford taking us further back," Schreiner said. "But in some respects, that may have meant that having our voice at Queen's Park was even more important."

It's still unclear if Schreiner's growing presence on the campaign trail as a scrappy, sincere underdog will translate into more votes or seats for his party. But his well-reviewed debate performances seem to have rattled his opponents enough to factor him into their own strategies.

During the first debate on northern issues, other leaders remarked repeatedly that they agreed with his points -- but New Democrat Leader Andrea Horwath later warned progressive voters against a "dangerous poker game" of voting for Schreiner's party when asked about similarities between their platforms.

Schreiner'sperformance during TVO's supper-hour debate that saw him take Ford to task over his pandemic response and environmental policies made such a strong impression that his name was trending on Twitter in Canada, and it even prompted an on-air endorsement from Ford himself. In the midst of a volley between the two men, Ford described Schreiner as "honest and up-front," and said he enjoyed working with him.

"You're that type of guy, you can put the political stripes behind you," Ford said to Schreiner, repeating a description that friends, colleagues and Schreiner himself often attribute to the Green leader and his approach to politics.

Western University political scientist Cristine de Clercy said it's likely no accident that Ford, whose campaign serves to benefit most from vote-splitting on the centre-left, would want to capitalize on Schreiner's growing appeal to voters -- many of whom are just now being introduced to the Green leader as a fresh face presenting his party for perhaps the first time as a legitimate place to park their votes.

As a leader, de Clercy said Schreiner has done well at broadening the typical Green platform beyond the environment to touch on other issues like housing and mental health, and said his "impressive" debate presence last weekstruck the difficult balance of effectively criticizing his opponents in a "tough yet convivial way."

"That's difficult in politics, generally, to be credible and likable at the same time, and he seems able to pull it off," she said.

Sean Yo, who worked as Schreiner's campaign manager in 2018, framed the appeal of his former boss somewhat differently.

"I think people want somebody that they can trust to actually behave like an adult while doing some of the most important work of our society," Yo, who's aiding the Green campaign in other roles this year, said in an interview.

"There's a lot of words that get overused in campaigns, things like integrity and respect, and trust and civility and things like that. But all you have to do is meet Mike and you know immediately that he's the real deal." 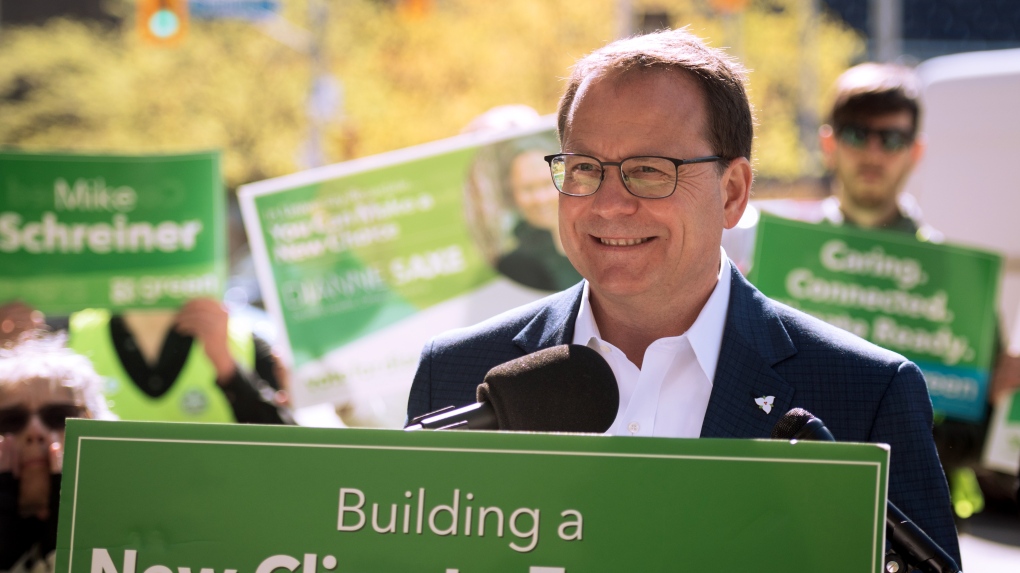 Ontario Green Party Leader Mike Schreiner smiles as supporters clap during a press conference at Bloor-Bedford Parkette in Toronto as part of his campaign tour, on Tuesday, May 17, 2022. THE CANADIAN PRESS/ Tijana Martin

Schreiner, 52, grew up on a farm in the U.S. and later moved to Canada with his wife, now residing in Guelph with his family. He said Green priorities on the environment, social justice and improving democracy overlapped with his own ideals when he decided to make the jump into politics. Before that, his background as a small business owner and in the non-profit sector helped him develop entrepreneurial skills which he said served him well in his efforts to build the Ontario Greens into a "viable party" over the last decade or so.

He's also a hard worker, Yo said, noting that Schreiner knocked on more doors than any candidate he'd ever worked with during their history-making 2018 run in Guelph.

Since earning his seat -- an achievement that came nearly a decade after he became leader of the party -- Schreiner has brought his ground game to other Green campaigns, including the successful 2021 federal bid in Kitchener Centre that saw Mike Morrice become the first Green sent to Ottawa by Ontario voters.

Some observers have credited Morrice's victory to the lack of a Liberal candidate in the race, but Morrice also points to help he had from Schreiner, who was one of Morrice's first calls when he decided to run. Schreiner's presence was instrumental on doorsteps in the riding, Morrice said as he recalled people often remarking that Schreiner's provincial win in Guelph shifted their perception of the party as a realistic ballot option.

"Having Mike here with us in Kitchener, I think, really helped us demonstrate not only that it's possible to elect a Green, but what you get when elect a Green. You get someone who is less partisan, who's more focused on democracy and on our community's priorities," Morrice said.

In an interview earlier this spring, Morrice said he planned to return the favour and help where he could with Schreiner's re-election bid in Guelph, with the leader expected to spend more time boosting other candidates in their campaigns this time around.

Despite being the party's only incumbent, Schreiner said he's "not taking anything for granted" in his home riding of Guelph, where he's still attending local debates, knocking on doors and listening to constituents' concerns.

The momentum of his post-debate campaign hit a snag when he tested positive for COVID-19 days later, but Schreiner said he was still determined to keep supporting candidates across the province remotely.

And while Schreiner is "laser-focused" on electing more Greens, gaining power was never the ultimate goal, he said in Huntsville.

"We'd like to put people before politics," he said.

This report by The Canadian Press was first published May 24, 2022.

Danish police believe a shopping mall shooting that left three people dead and four others seriously wounded was not terror-related, and said Monday that the gunman acted alone and appears to have selected his victims at random.