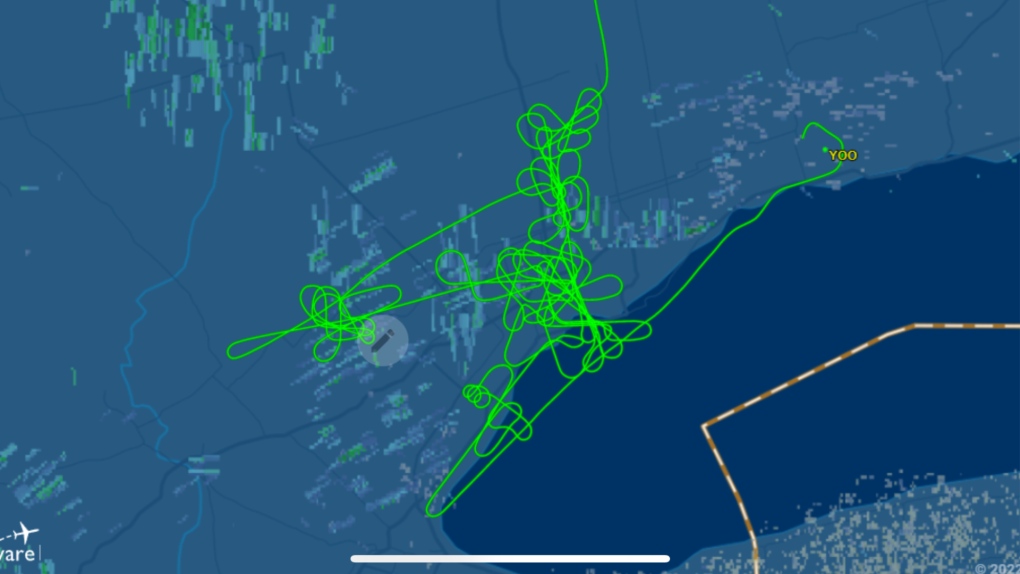 A screenshot of the Nov. 8 flight path from Barrie to Oshawa. (FlightAware)

A plane scheduled for a short flight in Ontario this week took a winding route that kept it in the air for more than four hours.

CTV News Toronto looked into the flight after a post gained attention on Reddit, questioning if anyone else in Toronto "was being kept awake at 3 a.m." by the aircraft's noise Wednesday.

The Piper PA-31 aircraft was flying at around 1,150 feet for the duration of its flight, flight tracking website Flight Radar 24 shows.

According to the Canadian Civil Aircraft Register (CCAR), the C-GNOV classified plane is registered under Eon Airborne Inc., though XEOS Imaging is using the plane under a long-term agreement.

LIDAR, which stands for Light Detection and Ranging, is a remote sensing technology that measures scattered light to determine the range or other information of a target.

St-Pierre said the aircraft are scheduled to fly over Toronto until Friday.

"We are constrained by Pearson Airport Traffic Control to fly as much as possible during night to avoid air traffic conflicts. We should finish our project tonight," St-Pierre said.

According to Flight Radar 24, the plane flew out of Lake Simcoe Regional Airport in Barrie at about 11:45 p.m. on Tuesday.

It was scheduled to land in Oshawa, which is roughly 80 kilometres away. Instead of flying directly southeast, the aircraft appears to have looped all across the Greater Toronto Area in the early morning hours.

It went as far as Guelph and Burlington before landing at the Oshawa Executive Airport shortly after 4:45 a.m.

St-Pierre said the current project is being flown under a private agreement, so he couldn't say what was being surveyed on the flights.

Earlier on Thursday, Manager for Lake Simcoe Regional Airport told CTV News Toronto he couldn’t say for certain exactly what the aircraft was doing, but also believed the plane was conducting survey work.

Mike Drumm said this is the "perfect" time to be surveying because the trees no longer have their foliage and there is no snow on the ground.