Ontario will not be moving forward with faulty blue licence plates

The decision comes months after the new design was released and intense scrutiny grew over the plate’s visibility at night.

“Our government’s primary focus over the past several months has been on the response to COVID-19,” a statement issued by Premier Doug Ford’s office on Wednesday stated. “In February, we commenced the process of designing and manufacturing a new licence plate.”

“However, after thorough testing by law enforcement and other key stakeholders, we are following their advice and will not be moving forward with the new plate for passenger vehicle use.”

The premier’s office stated that stakeholders identified “visibility issues due to glare” while the plates were under “very specific lighting conditions.”

“As such, the premier has decided that the redesign of the new licence plate will no longer proceed.”

Ontario will continue to use the “Yours to Discover” white licence plate moving forward, the statement said.

The government is “exploring all options,” including trailers or recreational vehicles, to use the 145,000 “A Place to Grow” plates that were manufactured while awaiting final testing results from stakeholders.

All remaining blue passenger plates the government has in stock “will be exhausted.” Ford spoke about this decision briefly on Wednesday afternoon during his daily COVID-19 news conference held at Queen’s Park. The premier said this topic “has not been top of mind” for him during the global pandemic.

“We got the feedback from the stakeholders and they are saying that it’s not 100 per cent, so I’m not putting any more resources towards this, it’s not going to cost the taxpayers anything and we’re just going to move forward,” he said. “We’re following their advice.”

Ford added that there are 31 "vehicle categories" the remaining blue plates can be used for. 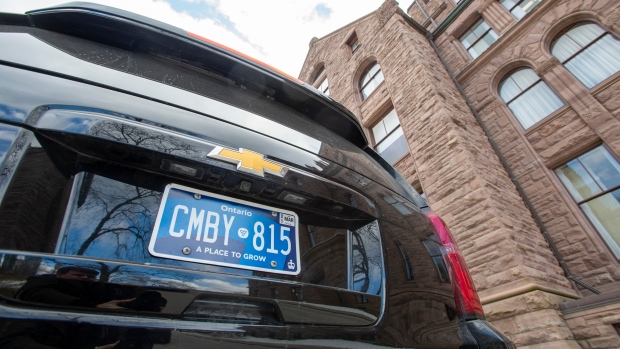 The government stopped issuing the blue licence plates at the end of February. At the time, officials said a non-disclosure agreement with the manufacturer, 3M Canada, prevented them from providing any reasons behind the defect. This came after officials initially denied any issues with the plates.

At the beginning of March, the Ontario New Democratic Party formally asked the province’s auditor general to review the cost of the licence plate fiasco and the non-disclosure agreement.

At the time, NDP Leader Andrea Horwath wrote that despite the government’s claim that replacing the faulty licence plates will not be at the taxpayers’ expense, the “chaotic roll-out of these new plates will certainly have costs associated.”

The letter asks for a review of all costs related to the production of the defective plates, as well as the non-disclosure agreement.