TORONTO -- The Ontario government is now saying they are working with the manufacturer of the new licence plates to “resolve” issues regarding poor visibility at night, one day after the Minister of Government Consumer Services said they are "actually very readable."

The new plates, which were designed by manufacturer 3M Canada with assistance from the Progressive Conservative government, hit the roads earlier this month.

The province first confirmed they were looking into reports that the plates were difficult to read at night on Monday following many social media posts pointing out the concern.

Back in April 2018, the Ford government gave the media a version of their new licence plates.

Here’s what happens when you shine some light on it. #onpoli pic.twitter.com/J3zMUSkrdP

Has anyone else noticed that the newly designed @ONgov license plates are totally unreadable from distance at night? Submitted screen grab taken from a 1080P dash camera. Could be an issue for GTA police forces in the future. pic.twitter.com/EN4hvoTYBL

One day later, MPP Lisa Thompson said the new blue and white plates work just fine. She said they were put through “rigorous testing” to ensure they were “durable and absolutely reflecting the key information that people need to be seeing.”

When asked about the online posts from earlier in the week appearing to show the plates being almost impossible to read when light is reflected onto them in darkness, she said “with any issues, we receive feedback and we take it back.”

“But, I can assure you that we have been exhaustive with our testing,” she told reporters on Tuesday. “We are confident in the plate that has been presented.” 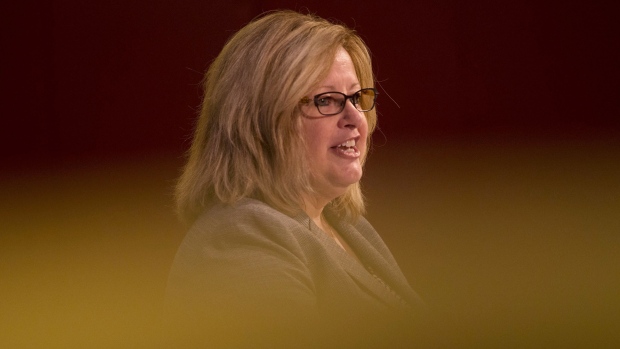 On Wednesday during Question Period, Thompson changed her tone, stating that the Ontario government is “continuing to work with the manufacturer, our stakeholders, and the public to get this right.”

As well, Ontario Premier Doug Ford’s office told CTV News Toronto Wednesday that they are "frustrated" by the situation.

"Public safety is the top priority of our government," Ford's office said in a statement issued on Wednesday.

"Premier Ford has personally spoken to the President of 3M on two separate occasions seeking an immediate solution to the issues identified with their product."

"The Government of Ontario expects 3M to stand by their product. We are working with them on a path forward and will have more to say shortly."

Meanwhile on Wednesday, 3M Canada confirmed they are working with the government to address the concerns.

"At 3M we are focused on applying our innovation and technology and are committed to working together with all stakeholders during design, testing and deployment," 3M said in a statement.

"We stand behind our products and are actively providing solutions to the Ontario government to address the readability issue as quickly as possible."

“The ability to clearly see the licence plates is obviously crucial if people need to call police to report suspected impaired drivers, or other dangerous drivers,” MADD Canada said in a statement issued on Wednesday.

As well, amongst those criticizing the plates is NDP MPP and Infrastructure and Transportation Critic Jennifer French. She addressed the issue during Question Period on Tuesday.

She said the plates were “weirdly reflective” when light shines on them.

“The whole plate glows and letters and numbers cannot be read with the naked human eye.”

A city spokesperson confirmed that its network of photo radar and red light cameras have trouble reading the words "Ontario" on the new plate.

As well, on Tuesday, a spokesperson for the Ontario Association of Chiefs of Police said the group has been hearing from front-line officers and concerned citizens about the possibly defective plates.

Ok, this was taken off duty in a relatively well lit parking lot with my headlights on. Did anyone consult with police before designing and manufacturing the new Ontario licence plates? They’re virtuallly unreadable at night. pic.twitter.com/CoLxnp3iTQ

“Some officers are surprised and have been taking photos, saying this is what they’re looking at,” Joe Couto said. “It shows very clearly that, especially at night, there may be some visibility issues.”