Ontario will begin accelerating second doses for individuals who received their first shot on or before May 9 in seven hot spot areas where the delta variant is a concern.

Individuals in hot spots within Halton, Peel, Porcupine, Toronto, Waterloo, Wellington-Dufferin-Guelph and York public health units will be eligible to book their second Pfizer or Moderna doses through the provincial booking system as of 8 a.m. on June 14.

They will also be eligible at pharmacies and through local public health booking systems.

Officials said the province will not be restricting vaccine doses by postal codes in these hot spots and eligibility applies to the whole region.

There are no further changes to vaccine eligibility outside of the hot spots.

Speaking to reporters at a news conference on Thursday afternoon, Ontario Health Minister Christine Elliott said the province will continue to accelerate second doses as additional vaccines are allocated by the federal government.

“This is an exciting time and we know that there are brighter days ahead,” she said. “Please continue to follow the public health measures that are in place to keep us safe and get vaccinated as soon as you’re able. If we all do our part, we will be able to enjoy a safe, two dose summer.”

The province said they will be providing “additional allocation” of vaccines where “local inventory has been utilized.” However, no further details were provided regarding the number or percentage of doses that will be allocated.

“What I can tell you is that we are working virtually on a daily basis with all of the public health units across the province and asking them to use what they have in their freezers to make sure that we can get as many needles into arms as possible,” Elliott said.

“As they work through what they have remaining, then they will be receiving more supplies.”

Workplace mobile clinics, as well as employer-led clinics in Toronto, Peel and York regions, will also begin second doses the week of June 20. 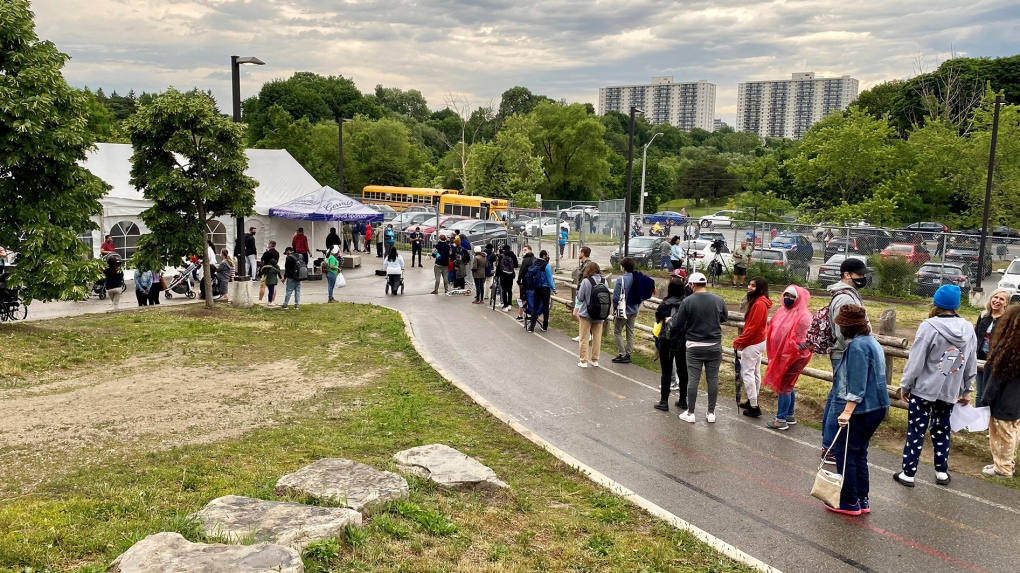 Public health experts have said the spread of the delta variant, first discovered in India, could send the province into a fourth wave.

Last week, the Ontario science advisory table estimated that the delta variant now makes up about 23 per cent of Ontario's cases, representing an estimated 200 new cases each day over that one-week period.

This week, individuals aged 70 and up, as well as individuals who had a first dose of a Pfizer or Moderna vaccine on or before April 18, were allowed to book a second shot. Those who received a first dose of AstraZeneca and wanted to receive a mRNA vaccine could also schedule their second dose through the provincial booking system or their local pharmacy.

Individuals who have received AstraZeneca must still wait 12 weeks before receiving a second dose.

When Elliott was asked about reducing the window between AstraZeneca doses similar to other provinces, she said that the 12-week interval is “the gold standard” and that the government is following the advice of medical experts.

Officials are encouraging residents who received their vaccine outside of Ontario to contact their local public health units to ensure their vaccination status has been properly recorded.

According to the government, 73 per cent of adults in Ontario have received at least one dose of a COVID-19 vaccine, while 11 per cent have received both shots and are considered fully vaccinated.

Of those fully vaccinated, the majority are aged 60 and over.