When can you book your second vaccine dose in Ontario?

TORONTO -- Ontario is hoping to have the majority of residents fully vaccinated by the end of summer.

To do so, officials announced that they will be allowing residents to book their second shot of a COVID-19 vaccine sooner than anticipated.

Residents have been asked to rebook their second appointments when they become eligible if they want to receive their shot sooner. If individuals want to wait for their already booked appointments, they can do so.

Here is a revised list of when residents are expected to become eligible for a second dose, according to the province’s timeline released June 10.

Week of May 31: Individuals aged 80 and over will be able to book their second dose.

Anyone who received Astrazeneca from March 10 onward became eligible on May 31 at a 12-week interval from their first dose.

Week of June 7: Individuals aged 70 and over and those who booked on or before April 18 were be able to book their second dose.

Week of June 14: Ontario has opened up second doses to individuals in seven delta variant hot spots who have received their first shot on or before May 9. 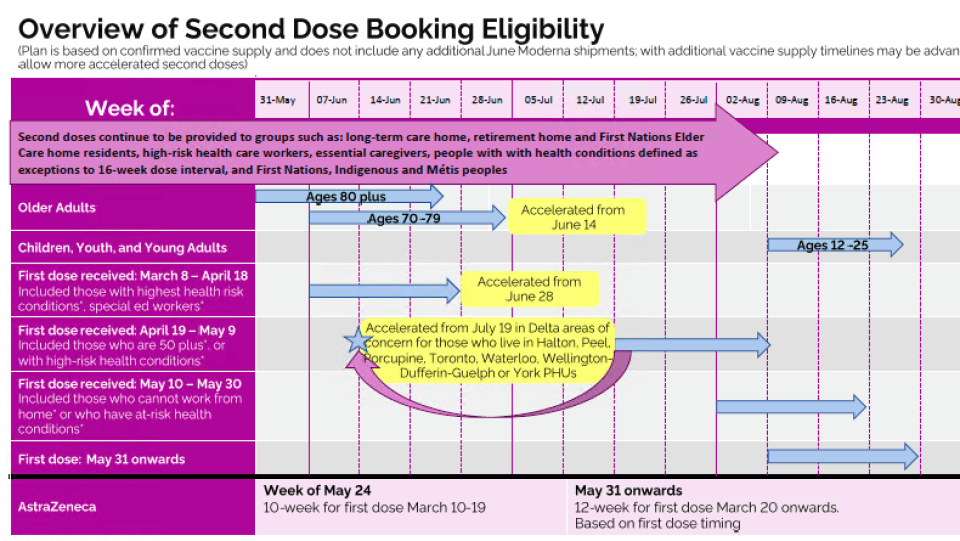 The province has updated their timeline multiple times since it was first released on May 28. When the timeline is updated, the province does not change the markers for future vaccine eligibility. The dates below will likely also be accelerated.

Week of July 19: Individuals who received their first dose between the weeks of April 19 and May 9 outside of will become eligible. This can include individuals aged 50 and up, as well as individuals with high-risk conditions.

Week of August 2: Individuals who received their first dose between the weeks of May 10 and May 30 will become eligible. This can include people who cannot work from home, as well as individuals with at-risk health conditions.

Week of August 9 to 16: Anyone between the ages of 12 and 25 will become eligible to book a second dose.

Week of August 9: Individuals who received their first dose from the week of May 31 onwards on a “first-in, first out” basis. The government says that dose intervals could be as short as 28 days. 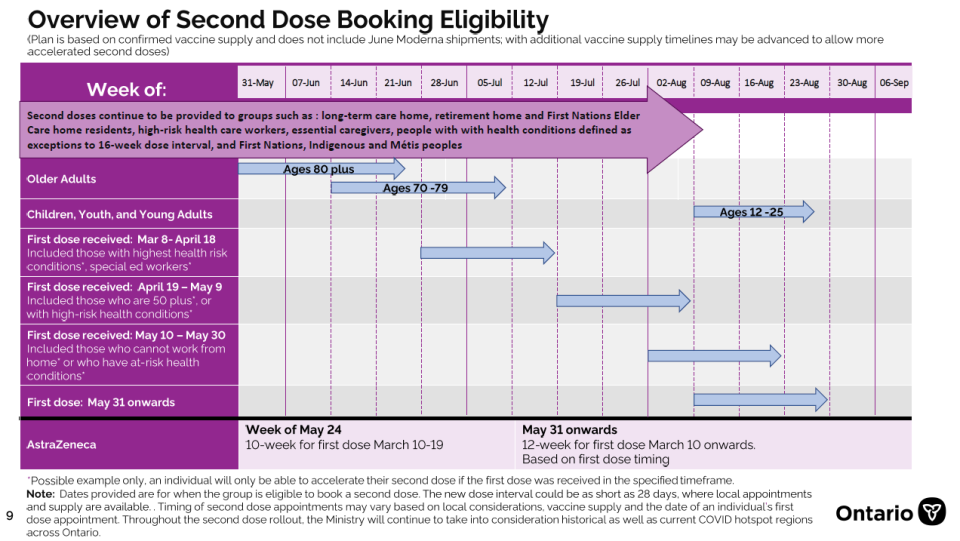 Residents were previously told to wait about 16 weeks, or four months, before getting their second shot.