The answer to fighting gun crime in Ontario isn’t a provincewide handgun ban but a continued effort to fund police services tasked with locating those that wield them illegally, Premier Doug Ford says.

“I've been very clear on my stance: We put $185 million into fighting gangs and guns. What we need to do is continue to invest and support our police,” Ford said at an unrelated news conference Wednesday.

His comments come a day after Ontario Liberal Leader Steven Del Duca promised a ban on handguns across the province if his party is elected on June 2.

Del Duca announced the plan, which would see a ban on the sale, possession, transport and storage of handgun, as he accused Ford of “putting the interests of the gun lobby ahead of the Ontario victims of gun crime.”

Ford scoffed at Del Duca’s accusation and asserted that no gun lobby has ever had to lobby him.

“I know one thing, there's two things: invest in our police officers. Invest in the gangs and guns division of the police and give them the tools to go out there and arrest these bad guys,” he said.

The premier argued that all levels of government know guns are flowing into the province illegally through the United States and that stronger measures are required at the border and in the courtroom to keep Ontarians safe.

“When we catch these people, it goes in front of a JP [justice of the peace], they can't have a slap on the wrist. You've seen it, everyone's seen it. In two days. These guys are running around on the streets. We need to work collaboratively with the federal government to toughen up any gun laws that we have,” Ford said.

Speaking to CTV News Toronto, criminal defence lawyer Ari Goldkind said the range of sentences handed down to those convicted of gun crimes in Ontario is “tremendous.”

“Sentences range depending on the history of the offender, and a number of individual-specific factors that a judge will consider,” Goldkind explained.

“While there used to be clear gun mandatory minimums starting in and around three years, some of those have been eliminated in a number of cases, particularly first-time offenders. Somebody with a history of gun possession or gun violence, though, may still face significant penitentiary time.” 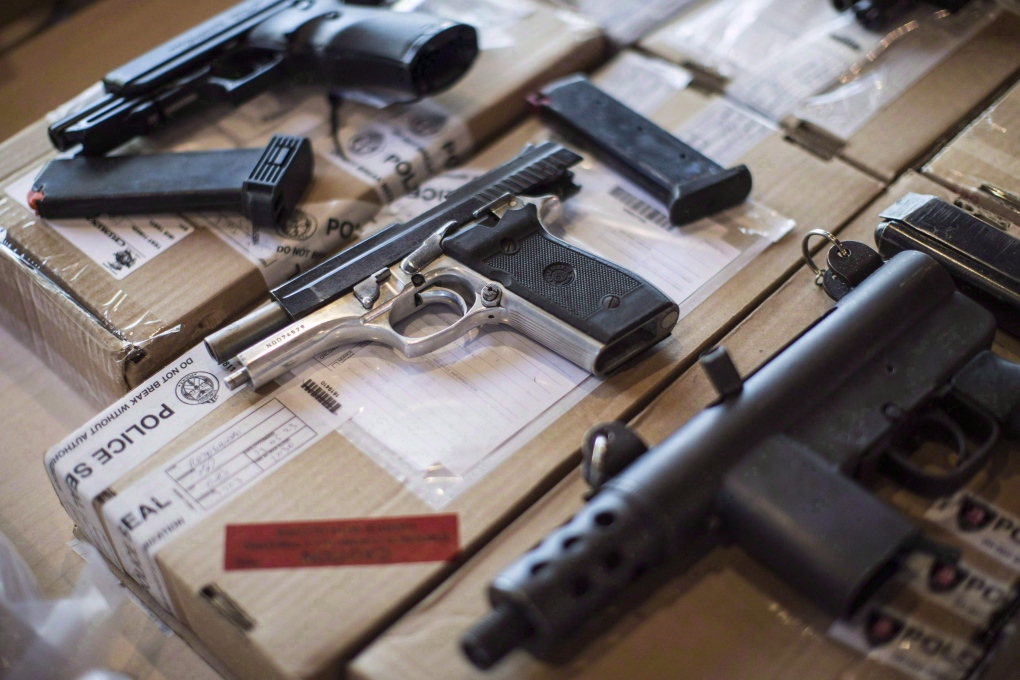 Police display guns seized during a series of raids at a press conference in Toronto on Friday, June 14, 2013. THE CANADIAN PRESS/Chris Young

That legislation allows handgun prohibition on a city-by-city basis – instead of a sweeping federal ban. Ford signalled his government’s opposition to that measure despite support for the idea from Toronto Mayor John Tory a year earlier.

In a news release issued Tuesday in response to Del Duca’s pledge, the Ontario NDP said their party has "long called for a ban on the urban sale of hand guns” and accused the Liberal government of neglecting gun violence for the 15 years that government was in power.

In Toronto -- where gun violence has plagued the city for years -- the year-to-date death total based on shootings is the highest in the past five years, which marks a 36 per cent increase from the same time period in 2021.

However, year-end data shows that shootings and firearm discharges in province’s most populous city have actually decreased from a record-high 492 incidents in 2019 to 409 in 2021.

Prime Minister Justin Trudeau says he will be visiting the regions in Atlantic Canada impacted by Fiona 'as soon as possible this week.' And, as MPs head back into the House of Commons for the first time after this weekend's storm, the NDP are requesting an emergency debate to discuss 'the urgent and escalating situation in Atlantic Canada.'

An 81-year-old man reported missing in Lower Prospect, N.S. is believed to have been swept out to the ocean during post-tropical storm Fiona, according to the RCMP.