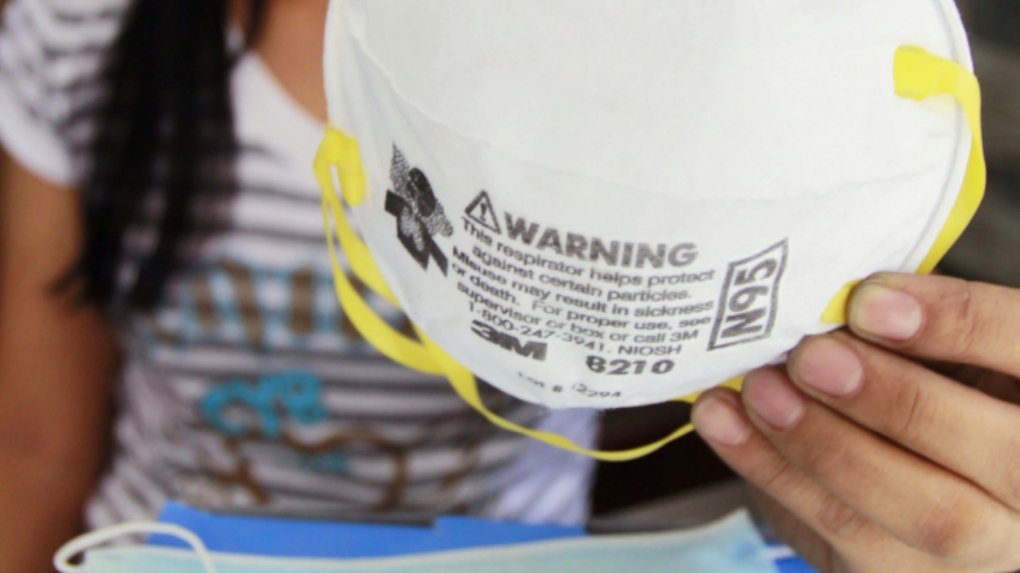 An N95 mask, manufactured by United States-based company 3M, is seen in this undated file photo. (The Canadian Press)

TORONTO -- The company behind one of the most valuable medical products during the COVID-19 pandemic is suing an Ontario business claiming false affiliation and price gouging.

Minnesota-based 3M, which produces the critically-important N95 respirators, says that the directors of Caonic Systems Inc. registered a website via e-commerce platform Shopify called 3M-Health.com and began selling the masks, which they claimed were from certified suppliers in Singapore and the United Kingdom.

3M alleges in its lawsuit filed in Ontario Superior Court that Caonic Systems Inc. was selling the masks for $17 each, a mark-up of more than five times the retail price.

Shopify closed the domain at 3M’s request. But 3M says the defendants, Zhiyu Pu and Harmen Mander, “immediately” reopened another website called www.tormenhealth.com and continued to claim an affiliation with 3M on social media.

“After Shopify shut the second site, Caonic persisted, relaunching briefly on another platform,” according to a news release issued by 3M Canada.

Speaking with CTV News Toronto, Mander says that they sold less than 50 packs of respirators in total before the store was taken down by Shopify.

Mander claims they intended to use the proceeds of their operation to launch a non-profit marketplace platform for businesses which have been shut down during the pandemic.

“We are university students, when the virus started in January, we noticed that a lot of schools were still operating as usual. Classrooms were packed. Many students, including ourselves, were concerned about our own personal safety,” Mander said in an email.

“Our goal has always been to help small businesses, our communities, and friends and family around us.”

3M is requesting that the courts order Caonic to assist in identifying the location of any of their remaining respirators, as well as sharing sales and customer information.

However, 3M says that if the masks are not authentic, the company will inform Caonic’s customers.

“Once the respirators are recovered, 3M will pursue damages. 3M will donate any damages recovered to COVID-19-related non-profit organizations.”

In an email to CTV News Toronto, Shopify said that they have closed more than 5,000 stores on their platform for policy violations.

“Our teams continue to actively review COVID-19 related products and businesses, and stores that violate our policies will be immediately taken down.”

The problem is not limited to Canada, 3M says it has filed a series of similar legal actions in in the United States. The company says it has since deployed an internal litigation team to identify other illegal activity in connection with its products.

“The company is working with online retailers and technology companies such as Google, Amazon and Facebook to identify and remove counterfeiters and price gougers from their sites and refer them to law enforcement authorities.”

In the meantime, 3M is asking people who have concerns about potentially fraudulent activity, price gouging and counterfeit products to file a report on their website.

There has been a massive push to secure more N95 masks for health-care workers across Canada since the coronavirus crisis began.

Earlier this month, Ontario Premier Doug Ford became involved in a war of words with United States President Donald Trump over his decision to cease exports of 3M's N95 face masks to Canada.

A deal would be reached days later between 3M and the White House that allows Canadians to continue receiving shipments of N95 masks.

Last month, the province issued an emergency order to prevent retailers or individuals from charging what Ford called unfair prices for necessary goods.