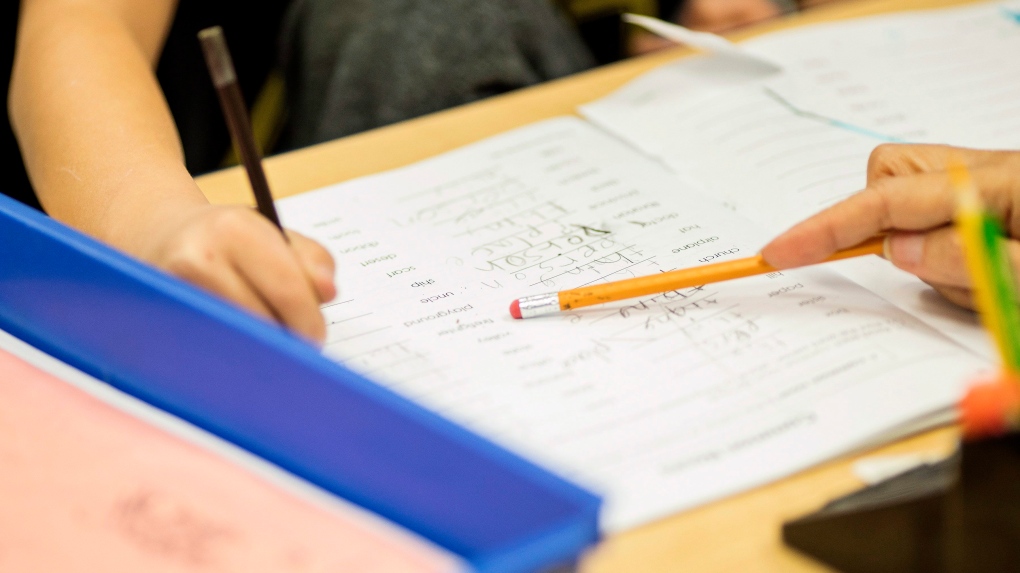 A tutor works with a student at an Oxford Learning program in Toronto on Thursday, December 7, 2017. (THE CANADIAN PRESS/Chris Young)

The Ontario government is trying to fight a court ruling that found its mandatory math test for new teachers is unconstitutional.

Ontario's Divisional Court last month struck down the math proficiency test as infringing equality provisions in the charter because it found the test had a disproportionate impact on racialized teachers.

The court said there were significant disparities in success rates of standardized testing based on race.

But the government is now suggesting that the court made legal errors in that decision, including using too low of a threshold to determine discrimination, given that the test was only administered once -- for the first time last year.

The ruling is also a "clear departure" from the charter principle that a "high degree of deference is owed to government in addressing complex social issues with many potential solutions," government lawyers wrote in a notice of motion seeking leave to have the Court of Appeal for Ontario hear the case.

"These developments in the law have implications beyond the parties, including other self-regulated professions with certification exams or requirements for entry into the profession," the government lawyers wrote.

"It is in the public interest to ensure the constitutionality of the MPT, given its purpose to ensure that children, including those from equity-seeking groups, have teachers who have demonstrated competence in the mathematics curriculum."

The Divisional Court noted that racialized teachers are under-represented in Ontario schools.

"Racialized students benefit from being taught by racialized teachers," the court said in its ruling.

"The deleterious effects of the (math proficiency test) on racialized teacher candidates who have been disproportionately unsuccessful on the test outweigh its benefits."

The court said the government has made efforts to mitigate impacts of the test on diversity, such as screening questions for bias and allowing candidates to rewrite the test an unlimited number of times. There is still a burden to taking the test multiple times, the court said."

The (government) cannot discharge its burden by imposing an option which breaches equality rights, and then make some effort to mitigate the negative effects, if options are available that would not breach equality rights in the first place," the Divisional Court said.

The court suggested the government could have instead required a minimum number of hours of math instruction or a math course in Bachelors of Education programs, required an undergraduate math course as an admissions requirement to those programs, or simply waited to see the effects of the rest of its math strategy.

Premier Doug Ford's government introduced the test as part of an effort -- including a new curriculum -- to improve students' scores on standardized math tests.

Teachers' unions objected to the test being applied broadly to all teachers, questioning why a kindergarten teacher needed to be tested on secondary school math concepts or why an art teacher needed to pass a math test.

This report by The Canadian Press was first published Jan. 14, 2022.

There was talk of impeachment Monday at the Trump Organization's criminal tax fraud trial -- not former President Donald Trump's, which happened twice -- but whether lawyers for his company were angling to impeach their own witness, longtime Trump accountant Donald Bender.

The Pakistani Taliban on Monday ended a months-long cease-fire with the government in Islamabad, ordering its fighters to resume attacks across the country, where scores of deadly attacks have been blamed on the insurgent group.