TORONTO -- For the first time since COVID-19 shut down the Ontario economy and shuttered the provincial legislature, MPPs challenged Premier Doug Ford on his government's pandemic response.

Question period resumed for a single day this week, allowing the NDP, Liberals, Green Party and independent members of the legislature to grill the government -- an opportunity opposition members have done without for the past eight weeks.

NDP Leader Andrea Horwath says the province must investigate the long-term care home system that has been at the centre of numerous deadly outbreaks during the COVID-19 pandemic.

Ford said his government will review the system but did not commit to holding a public inquiry.

Horwath says the province needs to examine the weaknesses in the long-term care system that made it so vulnerable to the pandemic.

Y'day afternoon he indicated that he wouldn't vote for the motion to extend the state of emergency - triggering a short debate on the motion today. #onpoli pic.twitter.com/d6WIrwRkpv

Ford stressed that his government agrees the long-term care system in the province is "broken," but stopped short of agreeing to the sweeping probe.

Ford committed to "put politics aside" during the emergency session of the legislature, which features 42 of the 124 MPPs in keeping with physical distancing rules. 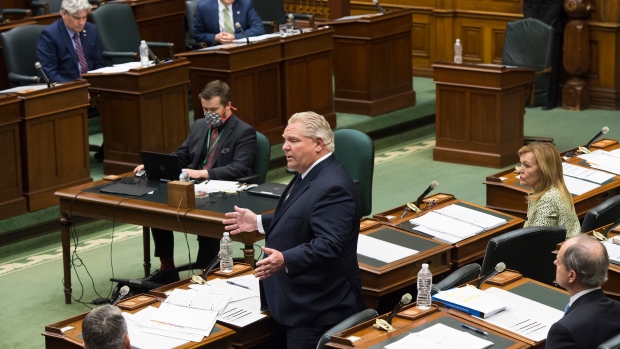 "There's lots of time to get into the mud and other nonsense,” Ford said on Monday. “I just don't have the time. I'm not in the mood for that. I want to move the province forward."

Before MPPs were allowed into the building they had to pass a COVID-19 health check, including a temperature check and screening for possible symptoms of the virus.

According to the Government House Leader's office the "extraordinary measures" would give the Legislative Protective Service the power to "deny access" to anyone displaying symptoms, while MPP access would be determined by the Speaker.

While the measure is temporary, Ford said "nothing is more important" than protecting the health of fellow elected officials and legislative staff. 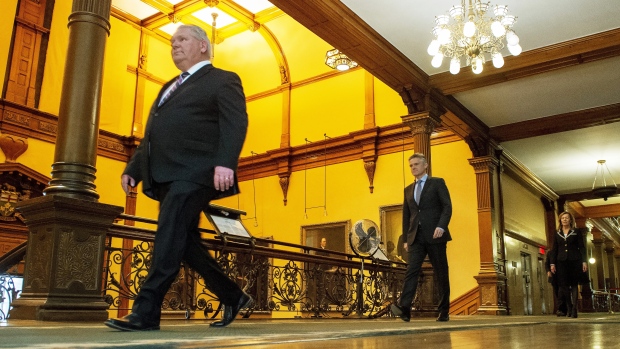 "If they're under the weather and showing high fever, that would scare me," Ford said. "They should be responsible ... just to go home.

During the emergency session, MPPs voted to extend Ontario's state of emergency until 2.

The current order was set to expire on Tuesday. The order has been in place since March 17.

Ontario has seen a decline in the number of new cases in recent days, with the total climbing by 1.5 per cent both yesterday and the day before.

Meanwhile, Ford said Ontario will enter stage one of a three-step plan to gradually reopen the province on Thursday.

"I'm confident we can move forward," Ford said at Queen's Park on Tuesday. "On Thursday, we will share more details about the next stage of reopening our province."

Ford said the province will allow more low-risk workplaces, seasonal businesses and essential services to reopen but has not provided any specifics. His office confirmed to CTV News Toronto a specific list of new businesses that can reopen will be released Thursday.

"We have hit stage one on Thursday," Ford said. "It will be stage one of three stages."

With file from The Canadian Press