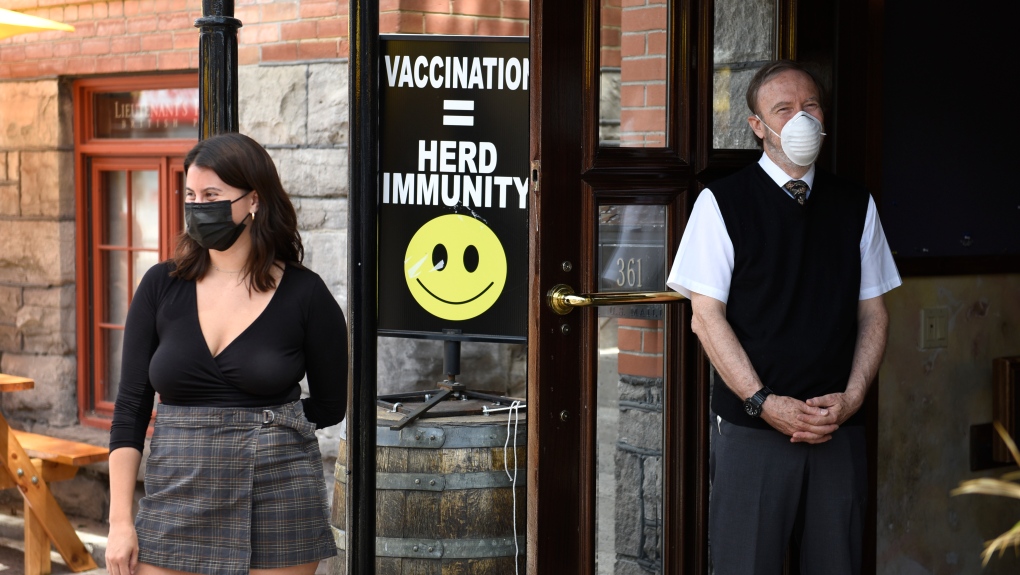 A sign encouraging vaccination is seen at the doors of a pub as staff watch patrons arrive, in Ottawa on the first day of Ontario's first phase of re-opening amidst the third wave of the COVID-19 pandemic, on Friday, June 11, 2021. THE CANADIAN PRESS/Justin Tang
TORONTO -

As a result, the seven-day rolling average of new cases fell to 291, compared to 390 seven days ago.

Provincial labs processed more than 25,626 test specimens, generating a positivity rate of at least 1.1 per cent.

The number of known active cases across Ontario fell to 2,729.

The province says 532,074 people have recovered.

Toronto reported 64 new cases on Thursday, 39 in Waterloo, 34 in Peel Region, 32 in Grey Bruce and 24 in the Porcupine Health.

The Ministry of Health said there were a total of 273 people in hospital due to COVID-19 across Ontario.

Update on COVID-19 variants of concern

115 new cases of the Gamma variant, P.1, were recorded Friday and the case total remains unchanged at 4,385.

The province said it administered a record 256,260 doses of COVID-19 vaccine on Friday.

Throughout Ontario’s seven-month vaccination campaign, 13,824,469 needles have gone into arms, including 3.9 million people who have received both shots and are considered to be fully vaccinated.