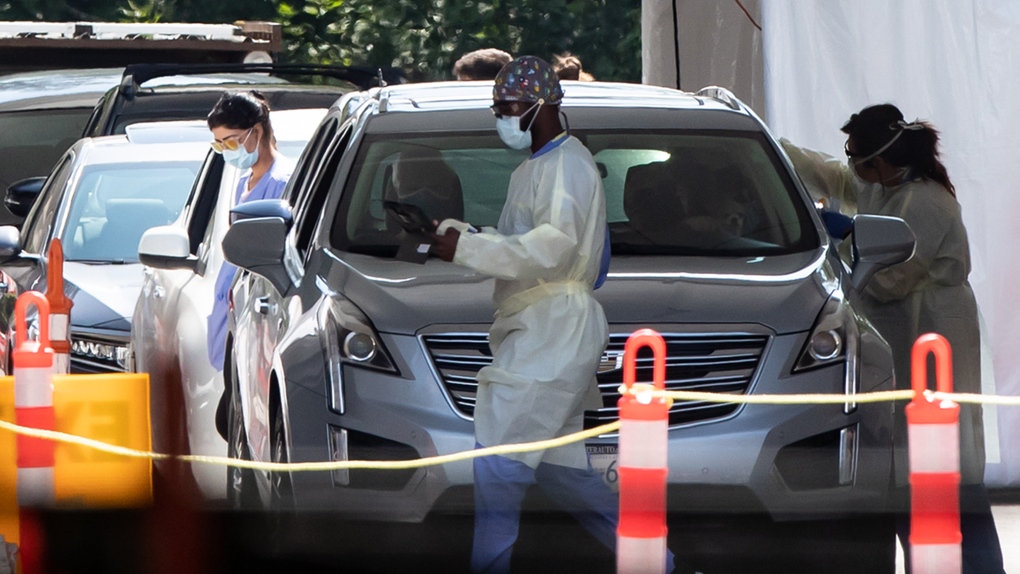 Healthcare workers are seen as motorists line up at a COVID-19 testing facility in Burnaby, B.C., on Thursday, August 13, 2020. (Darryl Dyck/The Canadian Press)

TORONTO -- Ontario health officials are once again reporting fewer than 100 new cases after a slight uptick.

Health officials confirmed an additional 81 new cases of the novel coronavirus on Sunday after 106 cases were reported on Saturday.

Prior to that small spike, the province saw numbers below 100 for four days straight.

The province also reported no new deaths related to COVID-19, which keeps the total number of deaths in Ontario at 2,789.

The new case numbers reported Sunday brings the province’s total number of lab-confirmed infections to 40,646, including 36,953 recoveries and the deaths.

Of the new patients, the majority were between the ages of 20 and 39. Twelve new cases were reported in people under the age of 20, while 17 were recorded in those over the age of 60.

Hospitalizations due to COVID-19 continue to decline. There are currently 37 people in the hospital being treated for the disease. Eighteen of those patients are in the intensive care unit and nine are breathing with the assistance of a ventilator.

Ontario Health Minister Christine Elliott said that 31 of the province's 34 public health units have reported five or fewer new cases of the disease on Sunday, with 17 of them reporting no new cases at all.

All regions have entered Stage 3 of the province’s reopening plan, which included the reopening of gyms, indoor dining at bars and restaurants and many facial services.

Today, Ontario is reporting 81 cases of #COVID19, a 0.2% increase. Locally, 31 of the province’s 34 public health units are reporting five or fewer cases, with 17 of them reporting no new cases. As always, today’s numbers will be available at 10:30 a.m. at https://t.co/ypmgZbVRvn