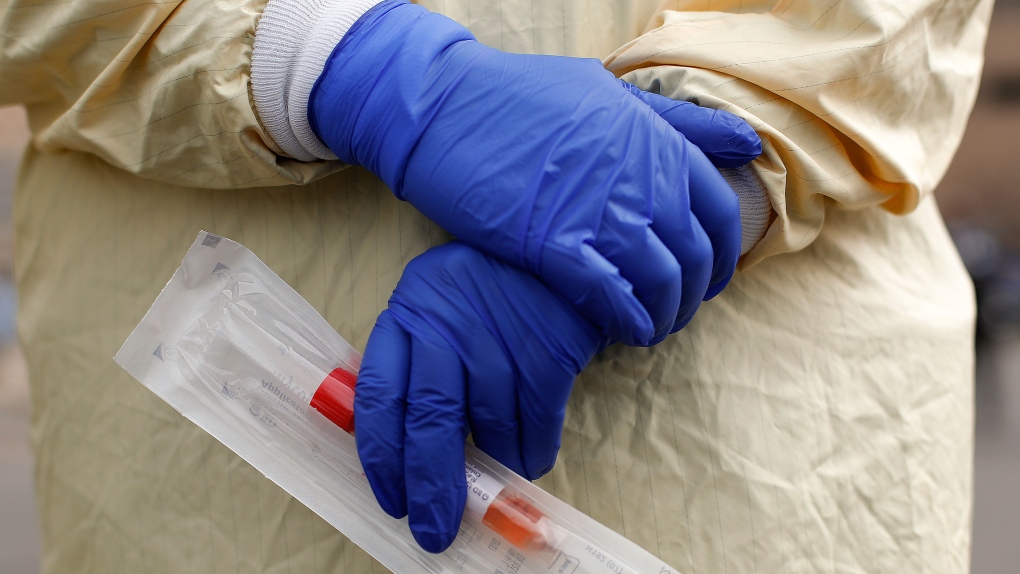 A nurse holds a swabs and test tube kit to test people for COVID-19, the disease that is caused by the new coronavirus, at a drive through station. (Paul Sancya/AP)

TORONTO -- Ontario is reporting 100 new cases of COVID-19, marking the fifth day in which the daily number of infections has been in the triple digits.

The new patients recorded Tuesday represent a slight decrease from the 105 new COVID-19 cases confirmed the day before. On Sunday, the province recorded 115 new cases of the novel coronavirus and on Saturday officials confirmed 108 infections. One hundred and thirty-one new patients were reported on Friday, but officials said it was an “overestimation” due to a glitch.

There are 39 people currently being treated for COVID-19 in hospital, although officials say that two facilities have not provided a total confirmed case count and that the number may be “a slight over, or under, estimation.”

Of those being treated in the hospital, 13 are in the intensive care unit and 10 are breathing with the assistance of ventilators.

There have been 41,607 lab-confirmed positive cases of COVID-19 in Ontario, including deaths and recoveries.

On Tuesday, Ontario Health Minister Christine Elliott said that more than 20,000 tests had been conducted in the last 24 hours. She also said that 30 of Ontario’s 34 public health units were reporting five infections or less.

Tuesday’s epidemiological report, which was released later in the day "due to a slight technical delay," shows that at least half of the COVID-19 cases were recorded in the Greater Toronto Area.

Twenty-six of the patients were from Toronto while 25 were in Peel Region and 12 in York Region. Ottawa is the only other region outside of the GTA to record more than 10 cases.

On Monday, the majority of new cases were in the Greater Toronto Area. The city’s medical officer of health told reporters she anticipates seeing “some increases” in the transmission of COVID-19 as people interact with each other and return to activities that were previously “paused” due to the pandemic.

The province has also allowed larger facilities such as gyms, convention centres, movie theatres and hotels to host 50 people per room.

Health officials have conducted more than 2.8 million COVID-19 tests since the first patient was discovered in Ontario.