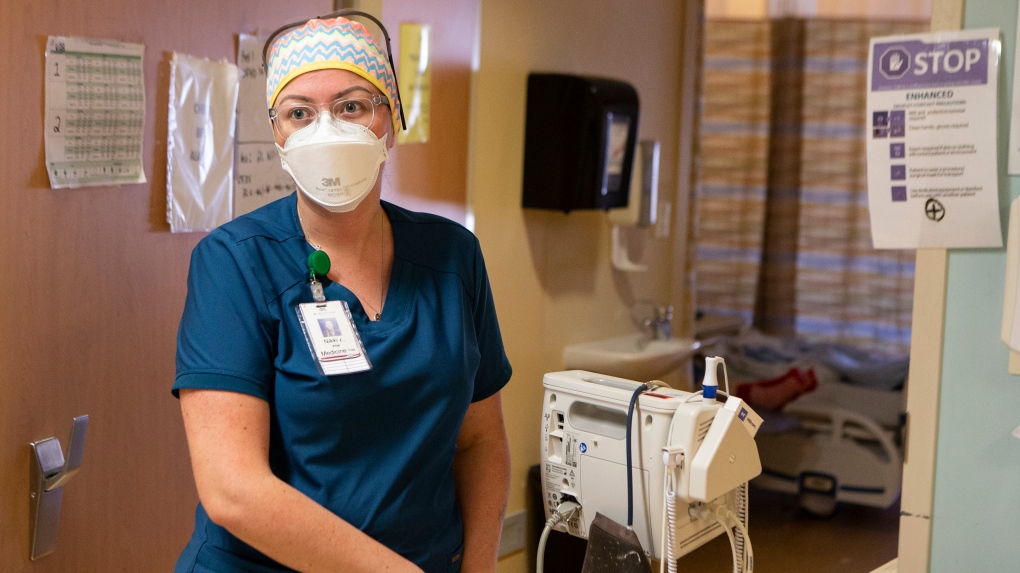 Nicole Corry, a personal support worker who works with COVID-19 patients in the Medical Inpatient Unit at the Bluewater Health Hospital in Sarnia, Ont., is photographed on Tuesday, January 25, 2022.THE CANADIAN PRESS/Chris Young

The hourly wage increase that personal support workers (PSWs) in Ontario have received over the last two years of the COVID-19 pandemic could soon become permanent, according to a new piece of legislation tabled by the Progressive Conservative government on Tuesday.

If passed, the Pandemic and Emergency Preparedness Act, 2022 would see workers in long-term care and community care continue to receive a raise of $3 per hour while workers in public hospitals will keep their $2 per hour bump.

The government said that since Oct. 1, 2020, more than 158,000 PSWs and DSWs (direct support workers) have received the increase on a regular basis.

The base wage rate for a PSW in Ontario before the increase is $16.50 per hour.

Tuesday’s announcement comes two days before the benefit was set to expire. The government had been extending the measure for months at a time throughout the pandemic.

Also included in the legislation is a commitment to recruiting and retaining more doctors, nurses and PSWs by way of a $142 million investment through the “Learn and Stay” grant. More than half of that money will be used to expand the government’s Community Commitment Program for Nurses over the next two years. That program gives up to 1,500 nurse graduates each year the opportunity to receive full tuition reimbursement in exchange for committing to practice for two years in an underserved community.

Tuesday’s announcement is part of the province’s “plan to stay open,” which is being billed as a strategy to “build a stronger, more resilient health system that is better prepared to respond to crisis.”

“While the pandemic is not over, we are now in a place where we can use the lessons learned over the past two years and take actions to ensure our health system is even better, stronger and more resilient in the face of any future challenge,” Minister of Health Christine Elliott said in a news release.

The province is also introducing steep penalties for those who sell, or “offer to sell,” government-provided PPE and critical supplies and equipment (CSE). Sources tell CP24 that the fines will reach as high as $20,000 for an individual and up to $250,000 for a corporation.

A similar measure was brought in back in December following reports that COVID-19 rapid antigen test kits were being resold for what the government described as unfair prices.

The legislation would also require the province to develop an emergency management plan that is publicly available and revised at least every five years to deal with future public health emergencies.

The government has pledged to expand the domestic production of personal protective equipment and health-care infrastructure, if the bill is passed.