When productions return to Toronto's Meridian Hall, they will turn on the stage lights, and the house lights—but they'll also turn on another set of lights that performers and audience members will never see.

Meridian Hall, like all theatres in the city, has been dark for more than a year. No concerts, no performances, no events.

"I think people will feel that they absolutely will want to come back to live events- theatre, sports, whatever it is" Matt Farrell, TO Live's Vice-President of operations, told CTV News. "We are anticipating there's going to be hesitation​."

And to ease that hesitation, officials with TO Live have been planning and preparing for a way to safely re-open- once the government allows it.

"At the beginning of the pandemic, everybody seemed to be selling a solution to something," Farrell said. "So it took a lot of time to go and sift through that, see what was legitimate, what was not legitimate​."

After spending months researching ways to improve the health and safety of their spaces, Live TO officials decided to make a number of changes. Some, like plexiglass and hand sanitizer, will be visible to patrons. Others won't be seen by the audience, staff, or performers, but will be working behind the scenes to keep people safe. 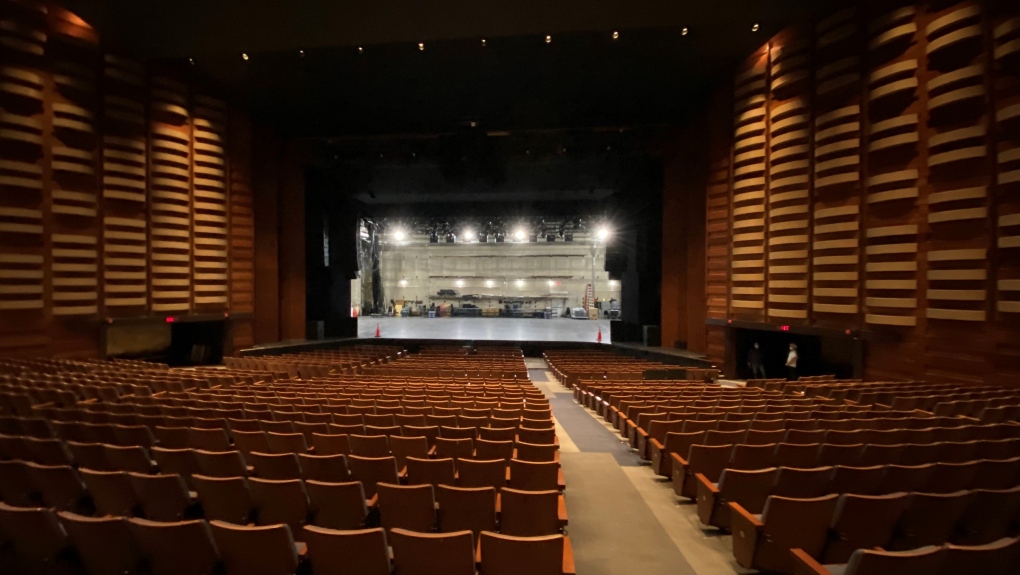 Toronto's Meridian Hall. (Scott Lightfoot/CTV NEWS TORONTO).Among them, a new application of an old technology, developed by a company out of Brantford, Ontario.

Johnston is the Chief Technology Officer of NEXNORD, a company that has created an LED light that uses powerful UVC rays to target viruses, like COVID-19. According to Johnston, the company's light is so powerful that it takes .07 seconds to start killing bacteria and viruses within two metres of the light.

"It's something that is very powerful, and it actually hits the DNA and the RNA, and destroys the carbon bonds and then it can no longer replicate- and it's dead," Johnston said.

Ultraviolet (UV) rays can't be seen by the naked eye, but​ are naturally emitted by the sun. UVA and UVB rays are what cause humans to tan, but UVC rays are absorbed by the atmosphere. It is the highest energy portion of the UV spectrum—so powerful it can damage human tissue. But by sealing their lights inside the air duct system, the company can disinfect the air without exposing the light to humans.

According to Farrell, "It will kill bacteria, pathogens, and even help the air smell better. In some ways, it'll take out the smells from the air. It'll help with respiratory concerns as well as allergies."

NEXNORD says they're currently installing their lights in a number of facilities, from schools to yoga studios and they say the technology could be used to sanitize the airflow almost anywhere.

Along with the UVC LED lighting, Meridian Hall, Meridian Arts Centre, and the St. Lawrence Centre for the Arts are all installing new sensors throughout their theatres to monitor air quality.

Farrell says he hopes the work behind the scenes will allow those in the seats to keep their focus solely on the stage.

"Hopefully in the back of their mind, they'll have a little bit of comfort and be able to relax and enjoy the show a little bit more."