One person dead amid multiple collisions around the GTA

One person dead amid multiple collisions around the GTA 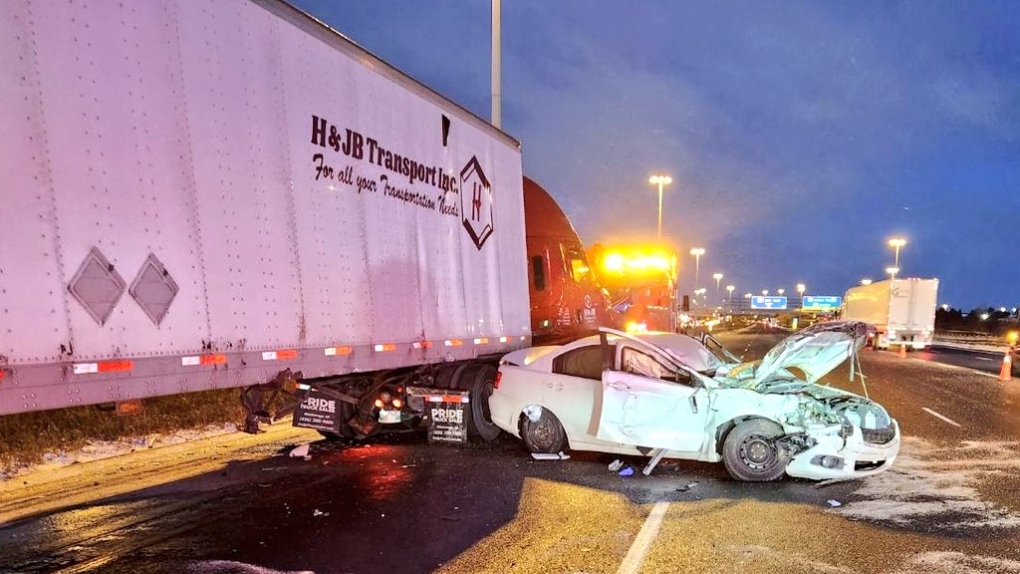 The scene of a crash on Highway 401 near Dixie Road can be seen above. (OPP)

One person has been pronounced dead amid a rash of collisions around the GTA that has Ontario Provincial Police warning people to exercise caution on the roads this morning.

Emergency crews were called to the southbound lanes of Highway 427, near the Queen Elizabeth Way, at around 11:45 p.m. Wednesday night.

Toronto Paramedic Services said one person was transported to a trauma centre in critical condition and three other people were taken to local hospitals in stable condition.

OPP Sgt. Kerry Schmidt said early Thursday that the person transported by paramedics died while on route to the hospital. OPP identified the deceased person as 32-year-old driver from Mississauga.

Schmidt said it occurred as other vehicles tried to avoid a broken down transport truck.

“There was a transport truck overnight that was broken down, blocking part of a lane,” Schmidt said. “Three other vehicles approached, tried to avoid it, ended up losing control.”

The crash occurred as the GTA sat under a winter weather travel advisory from Environment Canada due to strong winds and snow.

The advisory has since ended for the GTA. But while snow amounts were not heavy, the precipitation appears to have created some difficult driving conditions.

There have also been a number of other collisions this morning around the GTA.

Schmidt said a car went into the back of a transport truck in the westbound lanes of highway 401, just past Dixie Road in Mississauga. That person has been transported to hospital with critical injuries, he said

There are also multiple crashes on Highway 401 westbound in the area of Hurontario Street, Schmidt said.

“Again, with that wind and the weather, make sure you clear your vehicle before you head out. Be aware of changing traffic conditions and patterns because of closures and collisions that are happening really across the area right now.”

Collision: #Hwy401/Dixie Rd WB, driver of car taken hosp. with serious injuries. #MississaugaOPP investigating, all lanes should be reopened before 9am. pic.twitter.com/pgS1yOpYag

Mendicino: foreign-agent registry would need equity lens, could be part of 'tool box'

Public Safety Minister Marco Mendicino says a registry to track foreign agents operating in Canada can only be implemented in lockstep with diverse communities.

Vaccine intake higher among people who knew someone who died of COVID-19: U.S. survey

A U.S. survey found that people who had a personal connection to someone who became ill or died of COVID-19 were more likely to have received at least one shot of the vaccine compared to those who didn’t have any loved ones who had been impacted by the disease.