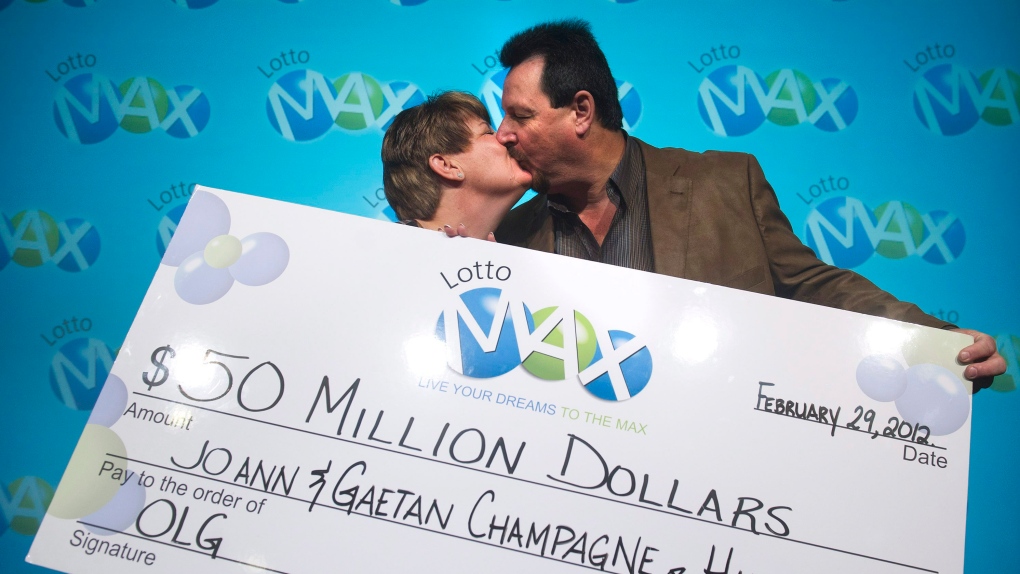 Lotto Max winners JoAnn Champagne, left, and her husband Gaetan Champagne share a kiss after receiving their $50-million cheque at the Ontario Lottery and Gaming Corp. in Toronto on Wednesday, Feb. 29, 2012. The two won the jackpot on Dec. 30, 2011. (Nathan Denette / THE CANADIAN PRESS)

TORONTO -- While there's no sure-fire way to guarantee a winning lotto ticket, Ontario Lottery and Gaming Corporation (OLG) has started compiling data on where the highest winning tickets have been sold in the province.

OLG is using a technology called the Data Analysis and Retrieval Technology (DART) system to compile a list of retailers in Ontario who have sold winning tickets of $10,000 or more in an effort to provide more transparency as to where winning tickets are sold and who the winners are.

The data can be searched by the public here.

The top ten highest wins, according to OLG’s data, are as follows:

The list is not updated daily, OLG says, and could include some discrepancies with recent winners.

“It’s updated using a little bit of automation, but also through what we can input ourselves,” OLG spokesperson Tony Bitonti told CTV News Toronto on Wednesday.

“We have 10,000 retailers across the province. We have more winners than any other region across Canada as well too, so there may be a little bit of lag time in terms of updating the system,” he said.

WHERE ARE THE LUCKIEST RETAILERS?

As it turns out, there is no lucky area of Ontario that sells more winning tickets than others.

“We don't like to say there's lucky areas or unlucky areas because, really, we deal in randomness,” Bitonti said.

Instant tickets are dispersed randomly through the province, well in advance of sales.

“If it's an instant ticket or one of the scratch tickets, those are distributed across the province in a very random way,” he said.

“Tickets like Lotto 649, Lotto Max or Lottario — anything that comes up at the terminal — is generated by the computer, so again, more randomness.”

Bitonti did say, however, that retailers that see higher traffic do tend to generate more winners. Although, this is due to higher populations, not luckier retailers.