The dream of home ownership for many Ontarians may never become a reality, according to a new survey.

New research published Wednesday by Canada’s largest independent real estate brokerage, Right at Home Realty, shows that more than 57 per cent of residents don’t believe they will ever be able to afford a home in their current city or town.

The problem gets worse for individuals in the Greater Toronto Area.

The study revealed that 61 per cent of respondents in the GTA believe they are being priced out. That number moves to 74 per cent in Toronto proper, where the average cost of a home was $1.35 million as of April 2022, according to the Canadian Real Estate Association.

“It is a bit disheartening. And certainly, the most recent challenges with rising rates and all the other pressures in the market have turned the tap off as far as demand goes and supply remains unchanged. It’s kind of a perfect storm in the worst kind of way,” John Lusink, president of Right at Home Realty, said in an interview with CTV News Toronto.

The survey, which polled 813 randomly selected Ontario adults, was conducted between May 10 and May 12 -- three weeks before the Bank of Canada increased its key interest rate by half a percentage point to 1.5 per cent.

At that time, 61 per cent of those surveyed said a mortgage rate hike would have no impact on their decision to buy a home -- down from 70 a year earlier.

But despite rising interest rates by Canada’s central bank in the face of inflation, Lusink said he believes that Ontario, and specifically the Toronto housing market, won’t crash, even as the drop in market activity continues.

READ MORE: Nearly 1 in 4 homeowners would have to sell if interest rates rise more, survey finds

“I think, given the quality and the nature of the city in terms of being a worldwide standard, we’re as close to [a crash] as we could get. I don’t see a crash and certainly immigration keeps pouring in so I think that sets the condition for maybe a balancing. But crash within the GTA proper, I don’t foresee.” 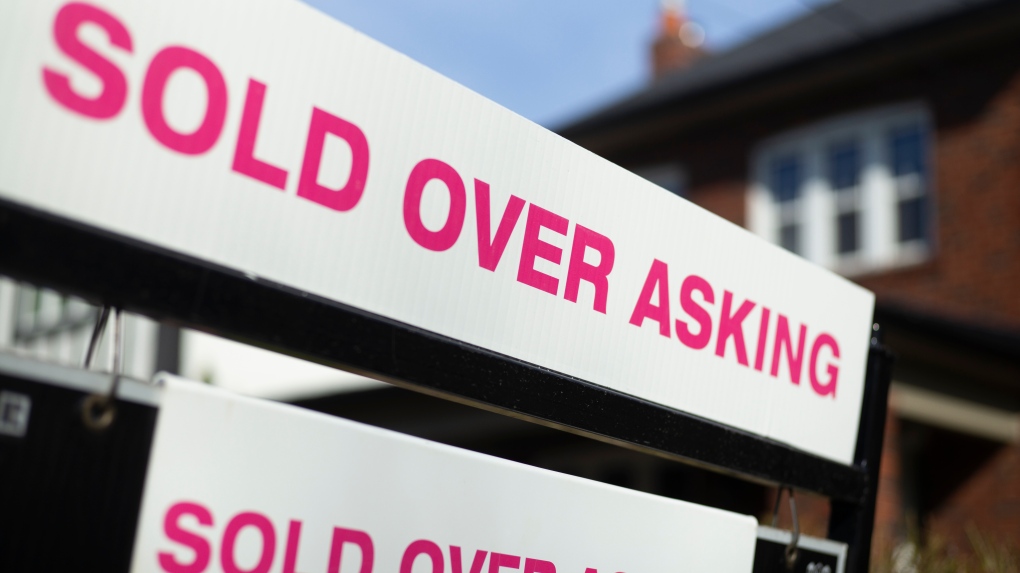 A house that sold for more more than the listing price in West-end Toronto, Sunday, April 24, 2022. THE CANADIAN PRESS/Graeme Roy

Earlier this month, a report published by Desjardins suggested that, due to rising interest rates and a return to a post-COVID world, the Canadian housing market overall had reached “an inflection point" -- which will be felt most in Ontario where housing prices could drop as much as 18 per cent.

"We expect the housing market correction in Ontario to be led by a decline in sales activity and prices in smaller centres outside of major urban areas," the report read.

Areas expected to be hit the hardest include Bancroft, Chatham Kent and Windsor-Essex, while Toronto prices will go largely unchanged.

EXTENDED: These are the areas where Ontario housing prices could see the biggest drop

While that may be good news to those looking for a home outside of the city, the survey by Right at Home Realty also found that most current home owners in Ontario aren’t planning on selling their properties any time soon.

In fact, 80 per cent of owners said they would stay put for the next two to the three years compared to 77 per cent in 2021.

“One of the things which you don’t hear much about is the dual-impact of rising rates: There’s a reduction in home buying power given that rates [are rising] and then, if I was looking to sell and still needed to get a loan, suddenly I’m faced with much increased monthly payments. I might look at that and say, ‘You know what, we might just stay put and make do,’” Lusink said.

Lusink added that unless the government introduces a cut to the current mortgage stress test, which determines if you’ll be able to make mortgage payments if and when interest payments rise, we could see the current rate of 5.25 per cent move to seven per cent or higher, further icing out prospective buyers.

“Without that adjustment, it makes it very hard for the average homebuyer for sure,” he said.

With files from Abby Neufeld

American actor Anne Heche will be taken of life support on Sunday, nine days after suffering severe injuries in a fiery car crash, as a compatible person was found to receive her donated organs, a spokesperson said.

A fire ripped through a packed Coptic Orthodox church during morning services in Egypt's capital on Sunday, quickly filling it with thick black smoke and killing 41 worshippers, including at least 15 children.