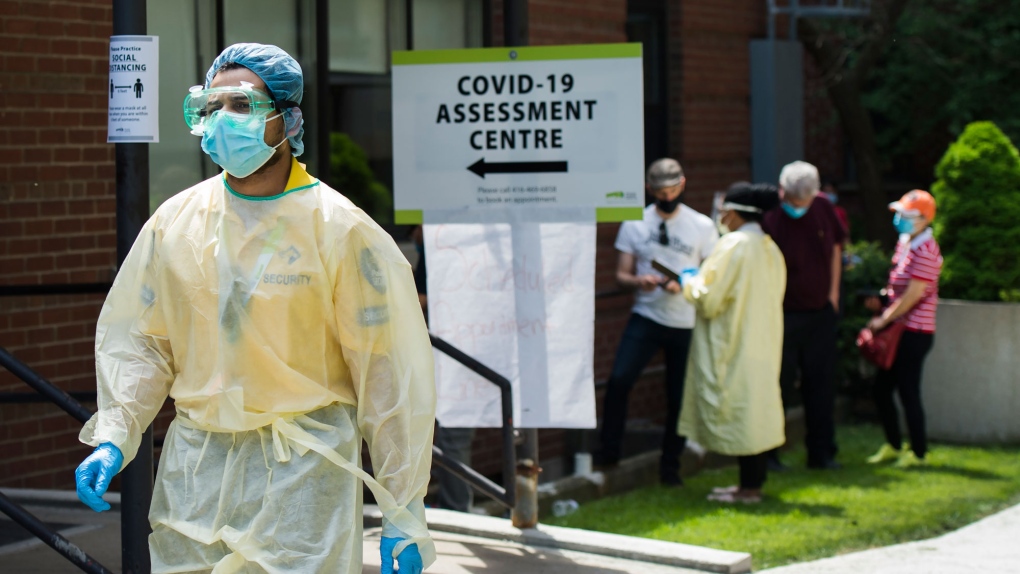 People line up to be tested at a COVID-19 assessment centre in Toronto on Tuesday, May 26, 2020. Health officials and the government have asked that people stay inside to help curb the spread of COVID-19. THE CANADIAN PRESS/Nathan Denette

TORONTO -- Nearly 80 per cent of COVID-19 cases in Toronto identified with a racialized group in November, according to the city.

The data shows that racialized groups continue to make up a disproportionate share of COVID-19 cases, as they have throughout the pandemic.

Meanwhile, 21 per cent of cases were among people who identified as white, while 48 per cent of Toronto’s population identifies as white.

In addition, 71 per cent of people who were hospitalized for the virus in November identified as coming from a racialized group.

“This overrepresentation is consistent with the higher overall case rates in these groups. It does not suggest racialized groups are more likely to become hospitalized if infected,” de Villa said.

The city gathered population data from the 2016 census.

Whereas, East Asian and white people are under-represented in cases and hospitalizations, according to the city’s data.

“South Asian and Indo-Caribbean people now make up the highest proportion of cases amongst ethno-racial groups overall at 27 per cent of cases while comprising 13 per cent of the population,” de Villa said.

Nearly half of COVID-19 cases in November were among those living in households that could be considered lower income, compared to 30 per cent of the population that met the same definition.

Meanwhile, 54 per cent of people who were hospitalized with the virus were living in low income households.

“While COVID-19 is a threat to everyone, it is plainly imposing real and disproportionate burdens on racialized communities and lower income groups. It is important to acknowledge how people’s living and working conditions are contributing to these inequities” de Villa said.

De Villa noted that racialized communities are more likely to work on the frontlines putting them at more risk of getting infected.

“Many workers and lower wage frontline jobs do not get paid if they call in sick. This is a significant barrier to our pandemic management efforts and reinforces the need for effective income supports for working people suffering from COVID-19, in particular paid sick days,” she said.

While discussing the city’s latest COVID-19 numbers, de Villa noted that the city’s effective reproductive number, which represents the expected number of cases generated from one case, dipped below one to 0.86, marking a trend in the right direction that hasn’t been witnessed for a few months.

The seven-day rolling average of new cases also dropped to 730 compared to 772 a week ago.

But de Villa warned that “a consistent pattern” needs to be witnessed before the decline in numbers can be called a trend.

On Thursday, the city reported 986 new cases and 10 more deaths. But Toronto Public Health said 102 cases were added to today’s numbers due to a data backlog that has now been resolved.