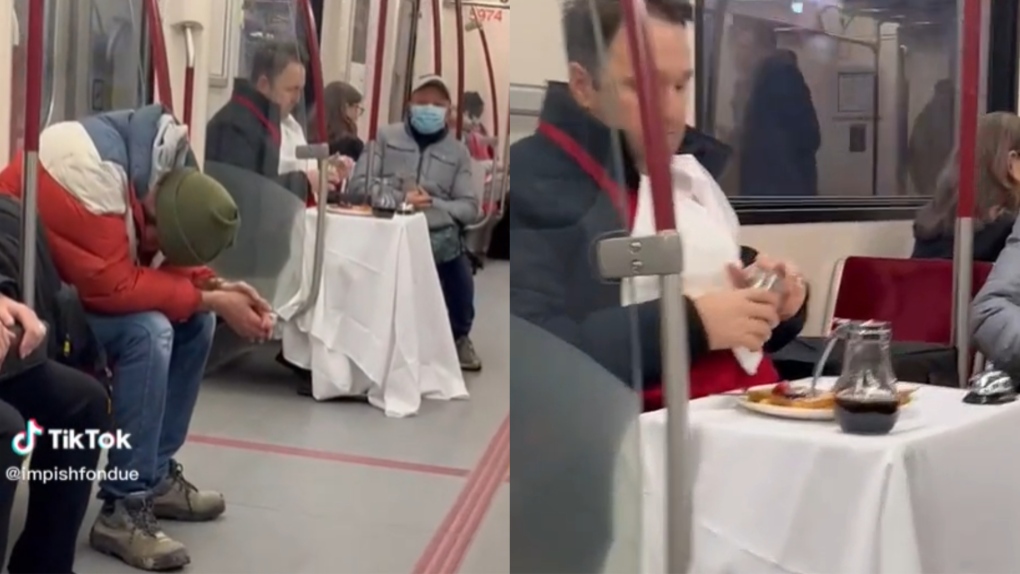 Would you ever consider the TTC a place to enjoy a sit-down meal?

One man, dubbed as ‘french toast guy,’ seems to enjoy it, and has been capturing the attention of many as a handful of videos of him eating some breakfast surface online.

“French toast guy” – whose identity remains unknown at this time – is seen in various videos on TikTok, typically eating french toast off a white cloth table with a knife and fork.

In one video, he is sitting onboard a subway car with a napkin tucked into the collar of his shirt and a maple syrup canister and bell on his table – presumably to be rung for some service.

Another video shows him outside of St. Andrews station with a toque – known as a chef’s hat – dipping a slice of white bread into some egg batter before cooking it in a frying pan on a hot plate.

“I just love french toast,” the man is heard saying in the video.

While a spokesperson for the TTC didn’t comment on whether transit riders are allowed to dine onboard the subway, they did confirm they have heard of him.

“Well he’s not waffling when it comes to his choice of breakfast foods, is he?” senior communications advisor for the TTC, Stuart Green said in an email.

“We’ve seen some odd things on the TTC, but this takes the pancake. I guess it’s a testament to the cleanliness of our stations. He puts the TC (table cloth) in TTC.”