Massive sinkhole swallows part of Dundas Street ahead of the holidays

Massive sinkhole swallows part of Dundas Street ahead of the holidays

A massive sinkhole has swallowed a portion of Dundas Street West and with it, local businesses’ hopes of the return to a regular holiday season.

“My sales are down. They’ve been down 40 per cent already since last weekend,” Melissa Ball, owner of Chosen Vintage, told CTV News Toronto.

The Dundas Street sidewalks between Brock and Sheridan avenues are open, but police cars, metal fences and orange pylons are barricading the street, deterring customers from visiting. Ball said 80 to 90 per cent of her business relies on those walk-ins.

“I haven’t had a normal holiday season since 2019,” Robin Levett, owner of Three Fates, another vintage shop on the strip, said. “I think all of us were feeling really optimistic.”

But on Nov. 24, the hope of recouping what was lost began to dwindle as a brittle sewer main collapsed on Dundas Street, revealing a large void – 20 by 20 inches wide and 3 to 4 feet deep – under the streetcar tracks.

William Shea, Toronto Water’s director of distribution and collection, said soil leaked into the damaged sewer, creating a void, and it was the thick Toronto Transit Commission tracks that prevented it from developing into a sinkhole.

However, the next phase of repair is expected to take about two to three weeks, Shea said – encompassing the entirety of the holiday shopping season. 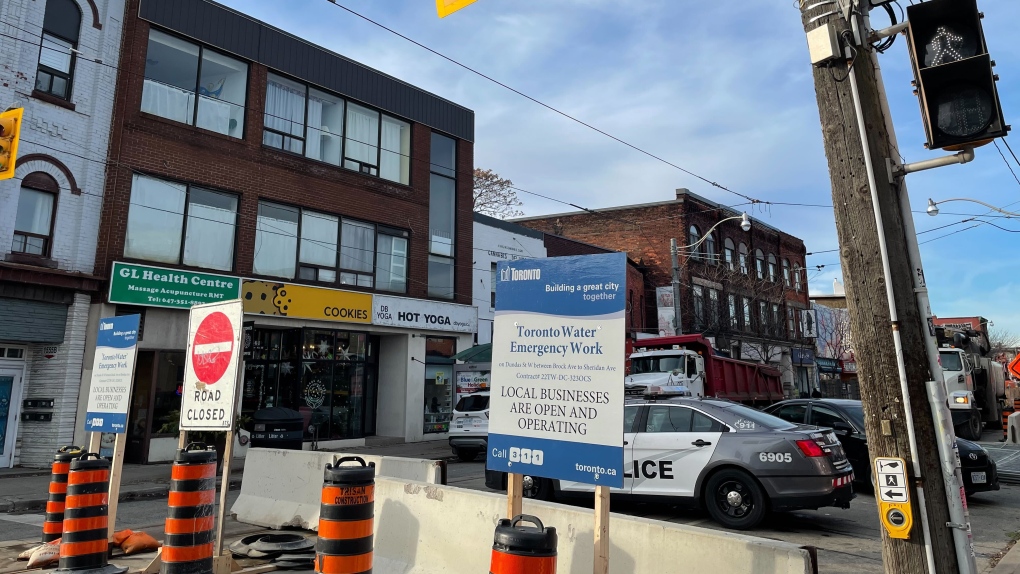 Repair work underway on Dundas Street between Brock and Sheridan Avenues (CTV News Toronto/ Phil Tsekouras). “I want to make it clear that every business owner on the block is aware of the fact that this is an emergency situation and has to happen now,” Rebekah Hakkenberg, owner of Daughter Shop, said.

“That doesn't change the fact that the timing of this couldn't be worse, and that this is having a devastating impact on many (if not all) of us.”

Anah Shabbar, spokesperson for the Little Portugal Toronto Business Improvement Area, said the impact of the construction spans further than just the intersection of Sheridan to Brock avenues. With the streetcar diverting service between Ossington and Lansdowne avenues, she said blocks of businesses are hurting.

“A lot of businesses make 40 per cent or more of their income during the holidays,” she said.

While Shabbar has been working with the community to brainstorm how to draw people to the street – whether that’s a winter concert or holiday market – she said the bottom line is businesses need financial assistance.

“At the end of the day, the [businesses] are all saying we need some kind of money, we need help with finances. They were hoping this would be a recoup year after the pandemic.”

The City says it is “currently exploring” additional support for businesses in Little Portugal while repairs are being made.

“We aren't just depending on the holiday season to help get us through January and February, which is always the slowest period in retail, we are depending on it to help make up for a very slow year, while we're still also trying to make up for what we lost during the first two years of the pandemic,” Hakkenberg said.

Health Canada is reviewing the safety of domperidone amid reports that some breastfeeding mothers in Canada and the U.S. have had serious psychiatric symptoms when they tried to stop taking the drug.

Ukraine on mission to ban Russia from Paris Olympics

Ukraine hopes to secure widespread international support for banning Russian and Belarusian athletes from the Paris Olympics due to Moscow's invasion, the sports minister said on Tuesday.