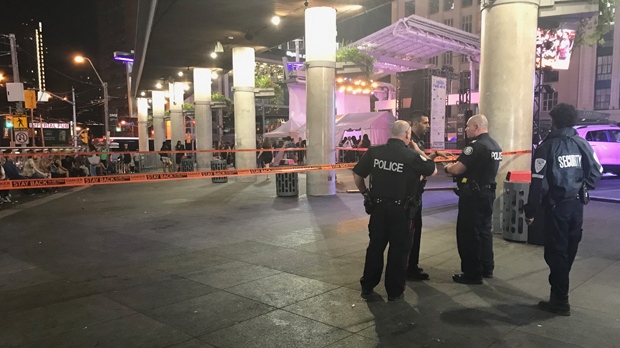 Police are seen on Yonge-Dundas Square after a stabbing on July 5, 2019. (Phil Fraboni/CTV News Toronto)

A man is in serious condition in hospital after he was stabbed in Yonge-Dundas Square on Friday night, Toronto police say.

Emergency crews were called to the square after 9 p.m. for a report of an adult male suffering from a stab wound to his upper body.

He was rushed to a hospital trauma centre in serious condition, paramedics said.

A section of the northern part of the square was taped off by police and private security guards.

Police described the suspect as a black male in his 20s, wearing a long-sleeved blue hoodie and multi-colour pants.

He was last seen on the southbound platfrom inside Dundas Station.