TORONTO -- Police say a man shot to death outside an apartment tower in Scarborough on Wednesday morning was waiting for a ride to work when he was gunned down by unknown assailants.

According to investigators, the victim, now identified as 45-year-old John Wheeler, was waiting outside an apartment building at 1350 Danforth Road, located north of Eglinton Avenue East, shortly after 3:30 a.m. when he was approached by two male suspects.

“One of the suspects discharged a firearm,” Det.-Sgt. Ted Lioumanis told reporters on Wednesday morning.

Wheeler, who sustained at least one gunshot wound to the torso, was rushed to hospital and was pronounced dead a short time later.

A man at the scene who identified himself as the victim’s stepson said his stepfather worked as a drywall installer and had lived in the building for the past 11 years.

“He is not known to police. He is a hard-working man. He lives in the neighbourhood here,” Lioumanis said.

“Right now in regards to motive, there is no motive that I can suggest as to why he was targeted, if he was even targeted.” 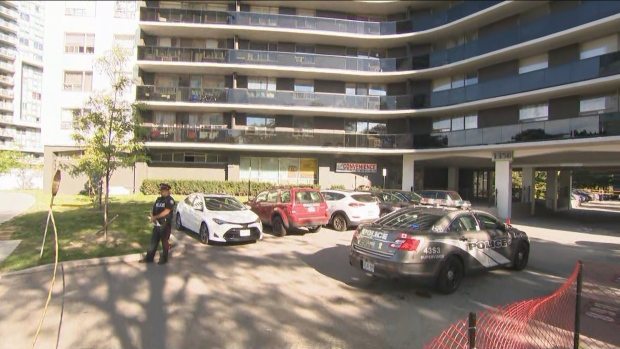 Detailed suspect descriptions have not been provided but police say the suspects were spotted fleeing in a dark-coloured SUV that was driven by an unidentified female.

It was last seen heading toward Danforth Road immediately after the shooting.

Police are currently canvassing the area for witnesses and video surveillance footage.

“We have our forensic identification unit here. They are processing the scene outdoors,” Lioumanis said.

“There are several residential buildings in the neighborhood here so we are hopeful that we will have some witnesses coming forward,” he added.

“Video cameras in the area will be reviewed and seized.”

Lioumanis could not confirm how many times the victim was shot.

“The post-mortem examination hasn't been conducted yet,” he said.

“We've had multiple reports of multiple shots as well as a single shot so we are looking into that.”

Police are asking anyone with information to come forward and speak to members of the homicide unit.

“If anyone in the neighbourhood... may have heard, saw anything, anything suspicious, give us a call,” Lioumanis said.