One man is dead after being shot by police near an elementary school on Thursday afternoon, Toronto police said, prompting hundreds of children at nearby schools to go into lockdown.

Police were initially called to Maberley Crescent and Oxhorn Road for reports of a person carrying a rifle on the street around 1 p.m.

About 20 minutes later, paramedics were called to the corner of Lawrence Avenue East and Port Union Road for a reported shooting.

Police said two officers discharged their firearms at the suspect, striking the man at least once.

Video obtained from the scene shows officers cordoning off a section of Port Union Road. An orange tarp was seen covering something on the sidewalk.

"We certainly understand the trauma and how traumatic this must have been for staff, students and parents given the two recent events that have happened in the United States," he said.

"We will step up patrols in the area and continue to work with our school and community partners and services will be available for those that require those services."

A spokesperson from the Toronto Police Association confirmed two TPS officers were transported to hospital following the incident, but did not sustain physical injuries. No additional injuries were reported.

Ontario's Special Investigations Unit (SIU), the agency responsible for investigating circumstances involving police that have resulted in a death or serious injury, has confirmed they have invoked their mandate following Thursday's incident. Four investigators and three forensic investigators have been assigned to the case, the agency said.

The SIU confirmed to CTV News Toronto Thursday evening that a BB gun was recovered at the scene.

"Whether the man was holding it or not, I'm not entirely certain at this point. But that will be something that the SIU investigators will be looking at," said Kristy Denette, a spokesperson for the province's police watchdog.

When asked if there was an exchange of gunshots between police and the man, Denette said the available information does not indicate that the man fired at officers.

"SIU investigators right now are going door to door, looking to speak to anyone who might have photos or videos. And that being said, it would be great if anyone does have any information to please reach out to the SIU to assist with this," she said. 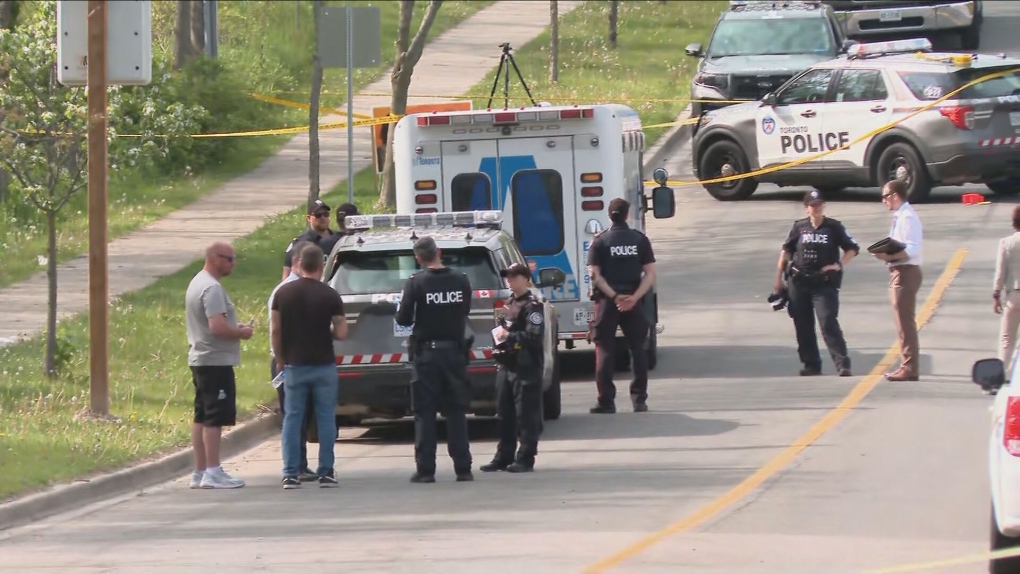 A man is dead after a shooting near a Toronto elementary school on Thursday. (CTV News Toronto)

A young girl at William G. Davis told CP24 she was in her science class when the class received a message from the principal that they were going into lockdown.

“This is not a drill, get under your desks,” she recalled being told.

She said they were not told anything for a while, and unease grew inside the class.

“I thought someone was trying to break into the school – I was just saying to myself – probably it’s the end of it,” she said.

She and her classmates were later let out of the school.

Another witness told CP24 that they heard "three rapid shots" and then saw officers attempt to revive a male on the sidewalk.

That witness told CP24 officers told him they were searching for a male on a bicycle with a rifle in the area.

As of 3 p.m., all lockdowns and hold and secures had been lifted.

On Thursday evening, Premier Doug Ford responded to the incident via Twitter.

"Thank you to police and emergency services for your quick action today in Scarborough," the tweet reads. "We’re extremely grateful for everything you do to keep our communities safe."

Thank you to police and emergency services for your quick action today in Scarborough. We’re extremely grateful for everything you do to keep our communities safe.

Accessing abortion still has its limits in Canada, advocate says

Leading economic powers conferred by video link with Ukrainian President Volodymyr Zelenskyy on Monday as they underscored their commitment to Ukraine for 'as long as it takes' with plans to pursue a price cap on Russian oil, raise tariffs on Russian goods and impose other new sanctions.

Digital censors quickly deleted a hashtag 'the next five years' Monday as online discussion swirled in response to reported remarks of Beijing's Communist Party secretary saying that the capital city will normalize pandemic prevention controls over the course of the next five years.