The last flight of internationally rescued golden retrievers touched down at Toronto Pearson International Airport on Tuesday ahead of a new policy that will ban the import of dogs from more than 100 countries at the end of the month.

At Pearson, emotions ran high as the dogs met their new owners for the first time.

The golden retrievers were rescued from shelters in Cairo, Egypt and brought to Canada by the non-profit organization Golden Rescue.

The group has rescued more than 1,700 dogs from abroad, but this is their last international rescue amid the new policy, put in place by the Canadian Food Inspection Agency (CFIA).

"It would have been nice if the CFIA had gone in and looked at our policies and procedures," said Dr. Scott Bainbridge, a veterinarian and Golden Rescue board member. "After bringing over 1700 hundred dogs we have never brought a rabid dog over."

The agency says as of Sept. 28, which is World Rabies Day, the entry of commercial dogs from countries it considers at high-risk for canine rabies will be prohibited. 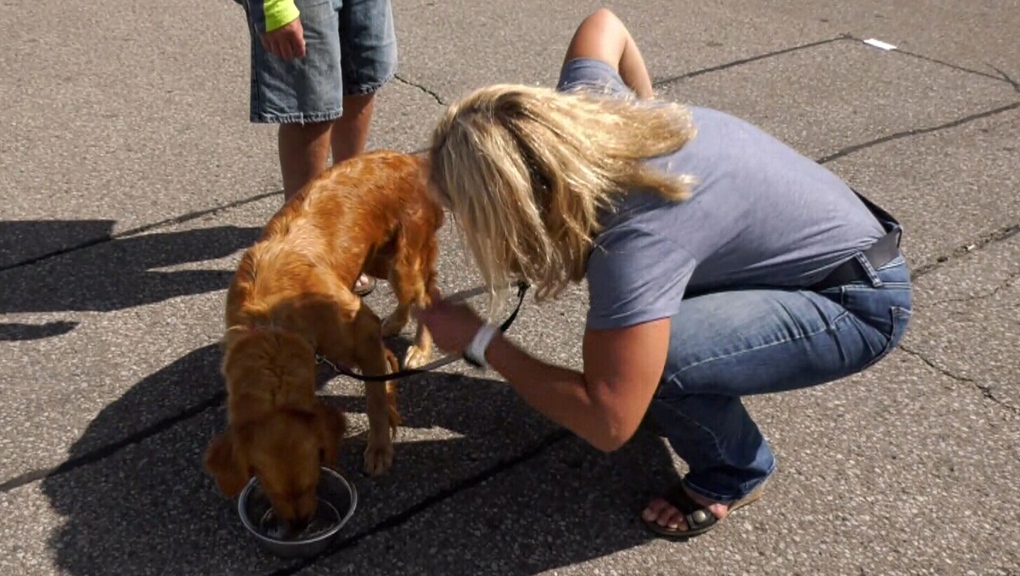 The CFIA defines "commercial dogs" as those for resale, adoption, fostering, breeding, show or exhibition, research and other purposes.

Egypt and Turkey are on the list which are the two countries Golden Rescue imports dogs for adoption.

Since learning of the ban in June, the group has scrambled to bring 130 rescues to Canada.

"There are thousands of dogs in the shelter system - it is a matter of life and death - the conditions, health care are not great," said Dr. Bainbridge.

The agency says the ban is necessary to reduce the risk of dog rabies entering Canada which it says poses a serious health risk to Canadians and their pets and once symptoms appear in humans, the disease is almost always fatal.

According to CFIA, two dogs from Iran imported into Canada with the disease. Canada does not currently have any confirmed cases of dog rabies.

"The importation of even one rabid dog could result in transmission to humans, pets and wildlife," the agency stated in a public notice published in June.

“We are heartbroken by CFIA’s decision, and we are beyond disappointed that CFIA did not reach out to the rescue community prior to making the decision to impose the ban," said Viive Tamm, Golden Rescue’s Board Chair.

"Had they done so, we would have been able to alleviate their concerns regarding the potential for importing rabies into Canada.”

Animal rights advocates and rescue groups are calling for exemptions or modifications to the new measure so they are able to continue their rescue efforts while at the same time keeping the public and domestic animals safe.

"We are strict with vaccine protocol, we actually run rabies titers before they come over to show if they were exposed to rabies they would be protected," said Dr. Bainbridge.

When asked about potential exemptions a CFIA spokesperson stated, "The CFIA has developed an approach that is relevant and proportionate to the current public health risks to animals and people, and takes into account aspects such as the CFIA’s regulatory framework and infrastructure, including quarantine facilities at points of entry."

Unless there are exemptions, Golden Rescue says it will focus its efforts in Ontario, Quebec and British Columbia.