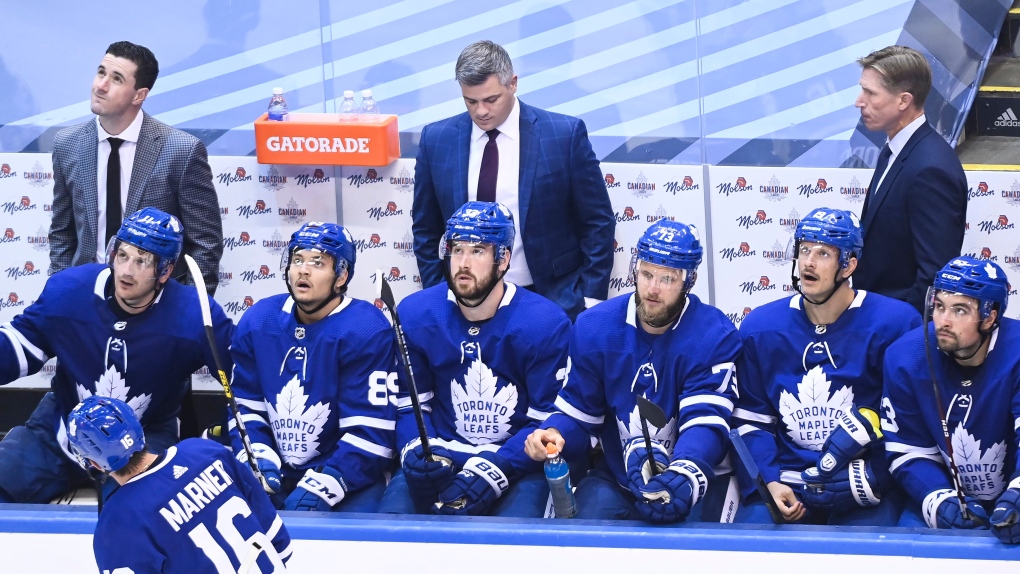 TORONTO -- Joonas Korpisalo made 28 saves in his first post-season start, Cam Atkinson scored early in the third period, and the Columbus Blue Jackets defeated the Toronto Maple Leafs 2-0 on Sunday to take an early lead in their best-of-five qualifying round series.

Alex Wennberg scored into an empty net with 18.2 seconds left.

Frederik Andersen stopped 33 shots for Toronto, which was the “home” team inside the friendly confines of a cavernous, empty Scotiabank Arena as the Eastern Conference's No. 8 seed in the NHL's 24-team restart to a campaign halted by the COVID-19 pandemic 4 1/2 months ago.

Ninth-seeded Columbus will now look to grab a stranglehold on proceedings in Tuesday's Game 2.

After both goalies put on a show in the second period, Atkinson snuck a shot from the top of the right circle off the rush under Andersen's blocker on an effort the Toronto netminder will want back just 65 seconds into the third for a 1-0 lead.

The Leafs tried to push and get their high-octane offence going, but were unable to get many second and third opportunities against the Blue Jackets' suffocating defensive structure.

Andersen kept the Toronto in the game with a toe save on Alexandre Texier with under three minutes to go, but his teammates were unable to find a way through to Korpisalo before Wennberg sealed it.

Leafs head coach Sheldon Keefe, who played 95 of his 125 NHL games under Columbus bench boss John Tortorella when both were with the Tampa Bay Lightning in the early 2000s, employs a much different style than his former bench boss. Toronto prefers an offensive-minded, puck-possession game, while the Blue Jackets grind opponents down, forcing them to fight for every inch of ice.

Following a scoreless opening 20 minutes that featured a couple of clear-cut chances, the goalies stole the show in the second.

The 26-year-old Korpisalo, who got the nod ahead of Elvis Merzlikins and started his first-ever playoff game after playing behind Sergei Bobrovsky the last five seasons, denied Matthews at the side of the net on an early power play, while Andersen stopped Eric Robinson on a break and Texier from the slot.

The Columbus netminder had his bench up banging their sticks on the boards later in the period when he robbed Matthews with the glove on a one-timer.

Blue Jackets defenceman Seth Jones then fired a shot off the crossbar before Andersen robbed Oliver Bjorkstrand - both players are from Herning, Denmark - with an exceptional toe save that the deserved a standing ovation, not the din of canned crowd noise inside Scotiabank Arena.

Toronto is serving as one of two NHL hub cities, along with Edmonton, that sees teams kept separate from the general public in tightly-controlled secure zones that include fan-less arenas, hotels and recreational areas.

Rookie winger Nick Robertson suited up for the Leafs after scoring 55 goals in 46 games in 2019-20 with the Peterborough Petes of the Ontario Hockey League, becoming the first 18-year-old to make his NHL debut in the post-season since Jarome Iginla in 1996.

Robertson had a terrific opportunity on his first shift, but Korpisalo was there with his right pad. The Leafs, who were back in their home locker room after making way for the Montreal Canadiens in Tuesday's exhibition game, were otherwise on their heels the rest of the first half of the first period.

The Blue Jackets gave their top defensive pair of Jones and Zach Werenski the green light to join the rush throughout the period, and they didn't hold back.

Andersen made a good stop on a Pierre-Luc Dubois breakaway before Matthews stole the puck and chimed a shot off Korpisalo's crossbar. Werenski then did the same off the near post at the other end moments later.

Both teams were close to full health after the schedule was suspended March 12. Jones would have been a serious question mark with an ankle injury had the playoffs started as usual in April, while Toronto blue-liner Jake Muzzin (hand) and Ilya Mikheyev (wrist laceration) are also back. Leafs winger Andreas Johnsson (knee) continues to work his way back and could be available as the resumption of play progresses, should his team advance.

Prior to Sunday, the Leafs last played a meaningful game March 10 - a stretch of 145 days - while the Blue Jackets' last suited up for real March 8.

Toronto and Columbus sat with identical points percentages (.579) when the novel coronavirus shuttered the season, but the Leafs secured the eighth seed with 28 regulation wins compared to the Blue Jackets' 25.

Notes: Toronto owns a 7-8 record all-time in best-of-five series, with those 15 appearances being the most in league history. The NHL used to play best-of-five in the first round, but expanded to a best-of-seven format following the 1985-86 season. ... The Blue Jackets and Leafs played twice in the regular season, but it was a while ago. Toronto picked up a 4-1 victory in Columbus on Oct. 4 before suffering a 4-3 overtime loss at home Oct. 21.

This report was first published by The Canadian Press on Aug. 2, 2020.